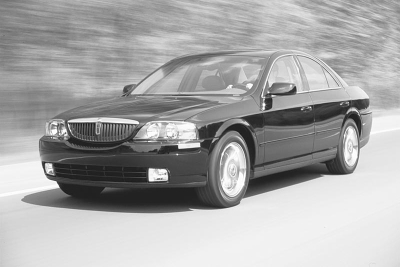 The 2002 Lincoln LS embodied the youthful spirit of buyers whom Lincoln hoped to attract.

While sales of the Lincoln Town car languished, Lincoln introduced a youthful replacement for the Continental aimed boldly at high-buck imports. Simply called LS -- for "luxury sport" -- this midsize sedan employed a new rear-drive "DEW98" platform developed with Jaguar and shared with the British brand's mid-range S-Type sedan. Both models arrived for 2000, but looked nothing alike. Where the curvy S-Type recalled Jaguar's beloved "Mark II" series of the 1950s, the LS referenced no previous Lincoln. It was crisp, clean, and contemporary, though not a groundbreaking design.

Marketing dictates required the S-Type be imported from Britain with higher-grade trim and equipment than the American-made Lincoln. The Jag also had somewhat more power, though each version used the same basic twincam multivalve engines: Ford's own 3.0-liter "Duratec" V-6 and a Jaguar-designed V-8 billed as a 4.0-liter in the S-Type, a 3.9 in the LS. Because Jaguar buyers were typically wealthier than Lincoln folk, S-Types ran some $10,000 higher than comparable LSes, making the Lincolns quite a buy at an introductory starting price of $31,000. Indeed, strong "near-luxury" value was a prime reason the LS copped Motor Trend magazine's 2000 Car of the Year award.

Yet this was no poor Yankee relation. Like the S-Type, the LS had such requisite sport sedan credentials as a taut all-independent suspension (with no electronic tricks), powerful four-wheel antilock disc brakes, traction control, firm rack-and-pinion steering, and front torso side airbags. And though less sumptuous inside, the Lincoln had enough wood and leather to suit a Jaguar, plus all the comforts and conveniences Americans expected. Advance Trac antiskid system and a Sport suspension/appearance package were also offered. And where S-Types came only with five-speed automatic transmission, the V-6 LS offered a five-speed manual too. Not many buyers opted for it, but it indicated that Lincoln was serious about the enthusiast market.

The driver-focused LS was a radical break with Town Car tradition, but necessary and overdue. "Lincoln has taken a pronounced risk with the very Euro-themed LS," said Motor Trend. "…[T]he result fortunately justifies the gamble. The LS not only brings a new dimension to Lincoln…it's simply a blast to drive." Indeed it was: agile and assured on twisty roads and quick on the straights, with 0-60 mph taking around 7.4 seconds for a manual V-6, 7.2 for an automatic V-8. "Simply put," MT concluded, "the LS is the car that wholly changes the image of what an American luxury sedan can be."

But the LS did little to change Lincoln's fuzzy image or bottom line. A sporty four-door was a showroom oddity among Town Cars and "lux trucks," and buyers could find more status for similar money elsewhere. Sales waned quickly as a result, dropping from a first-year 61,000 to the high 30,000s in 2001-03, then skidding below 20,000 in calendar '05. Lincoln tried hard to lure buyers en route, juggling features and options each season; boosting V-6 power two years straight; and muscling up the V-8 for 2003, when all models received a mild restyle and changes to "more than 500 components and systems." Car and Driver found lots to like in its test '03 V-8 Sport -- including a quicker 6.7-second 0-60 mph dash -- but bemoaned steady price creep that had pushed a well-equipped LS to near $50,000. "…Lincoln thinks it can compete without a price advantage. Good luck. As exemplary as it may be, the LS lacks the reputation of its rivals -- Lexus for its antiseptic perfection, Mercedes for its unassailable pedigree, and BMW for its arrogant dash. Intangibles, to be sure, but in this class, perceptions count."

With Dearborn fast approaching the brink, the LS rolled on through 2004-06 with no further changes of note. It then died as an early casualty of Ford's "Way Forward" belt-tightening program, announced in early '06. The LS was a bold step for Lincoln, but it was only a first step. Had it been quickly followed by a similarly sporty compact sedan, Lincoln might have been in much better shape.