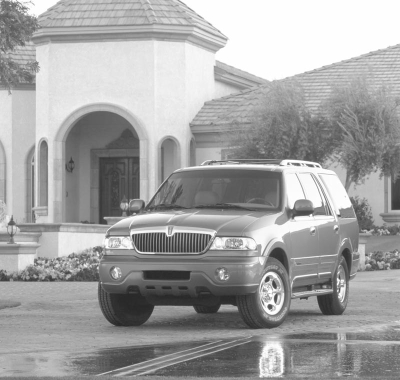 The 1998 Lincoln Navigator was Lincoln's first -- and most successful -- foray into the SUV market.

SUVs were storming the market. Most every one posted impressive sales gains each year, prompting even more entries as the '90s progressed. Significantly, many people began buying SUVs as replacements for cars, and some splurged for high-end models with all the trappings they could get.

Taking stock of this lucrative action, Lincoln fielded the Navigator for 1998. Though based on Ford's popular full-size Expedition SUV, it stood apart with a Lincoln grille, a few new body panels, a much dressier interior, and a number of standard features that were options on the Ford, including a 230-bhp 5.4-liter "Triton" V-8 with single overhead camshaft. At first, executives worried that people might balk at a gilded Ford costing some $10,000 more. "At least we won't be out too much money if it ­doesn't work," one Lincoln honcho said privately. But the Navigator did work, immediately zooming to the number-two spot in Lincoln sales with nearly 44,000 units for calendar '98. Cadillac, caught by surprise, rushed out a luxury GMC Yukon. Lincoln replied by adding 30 horses to that year's Navigator, then substituting an exclusive twincam 5.4-liter InTech V-8 with 300 bhp.

As Lincoln's first truck, the Navigator attracted buyers who had never looked at a Lincoln before, just what planners had hoped. Though it lost some sales momentum once Escalade arrived, Navigator remained vital to Lincoln sales into the new century, good for roughly 32,000 to 39,000 orders per year, each one a high-margin payday. After adding a few conveniences through 2002, Navigator was fully redesigned with a ride-enhancing independent rear suspension and power-operating standard third-row bench seat, both class firsts shared with Expedition. The makeover also introduced Ford's Advance Trac antiskid/traction-control system as an option and standard curtain side airbags to protect the heads of those in the first- and second-row bucket seats. Two other new extras were unique to Navigator among SUVs: a power-operated liftgate and power running-board side steps that automatically moved in or out when opening or closing a door. Sales finally weakened in calendar 2005, sliding below 26,000, though that was mainly due to a sharp spike in gas prices -- in some places to an unheard-of $3-plus a gallon.

But Lincoln was still a novice with trucks, and proved it with the 2002-03 Blackwood. This full-zoot take on the Ford F-150 Super Crew four-door pickup mated the Navigator's 300-bhp V-8 and front-end sheetmetal with a special four-foot, eight-inch cargo box with a power-operated front-hinged hard cover. Lincoln hoped to sell 18,000 Blackwoods in the first two model years, mainly to trailer-towing horse owners and other landed gentry, but moved less than a quarter of that number before giving up. This failure was easy to explain: Blackwood was pricey for a pickup -- no less than $52,000 -- yet woefully impractical. Serious truckers laughed at the lack of a four-wheel-drive option, the beautifully trimmed but coffin-small load bed, and the swing-out tail doors instead of a swing-down gate. If nothing else, the Blackwood is rare enough that it may interest collectors someday.

Lincoln was little more successful with its second SUV. A 2003 debut, the Aviator applied Navigator-like styling and trappings to the familiar Ford Explorer and related Mercury Mountaineer. Included were that pair's optional 4.6-liter V-8 with a bit more power, curtain side airbags, power-adjustable pedals, rear-obstacle-detection system, and an uptown interior. A laudable 2004 option became standard for model-year '05: the Advance Trac antiskid system with new Roll Stability Control. Developed by Volvo, now owned by Dearborn, RSC employed special sensors that could detect an impending rollover and would automatically activate the antiskid system to help prevent it. But despite numerous standard goodies and fair pricing, the Aviator never took off, and Lincoln bailed after 2005. Buyers were demanding more "car" in their SUVs, and Aviator was still too much a truck.

By contrast, the old Town Car kept cruising on as the most valuable player in the franchise, accounting for at least 50 percent of Lincoln calendar-year car sales from 1998 through 2005. Trouble is, if the star goes into a slump, the whole team suffers, and that's what happened. For those eight model years, Town Car and total Lincoln car sales tailed off in almost perfect unison. Things would have been worse without the Navigator's help, but they were bad enough, car volume plunging more than 50 percent for the period from 150,000 units to just over 71,000. In this, Lincoln symbolized the steady decline of Ford Motor Company itself.