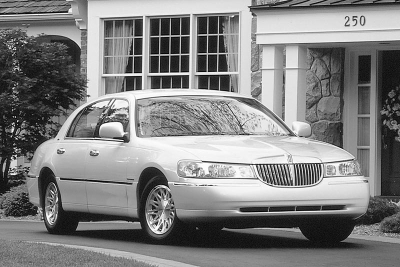 And so the battle was joined: front-drive V-8 Lincoln versus front-drive V-8 Cadillacs. On paper, the Continental covered all the bases. (Company marketers even coined the snappy name "InTech" for the dohc engine used here and in later Mark VIIIs, a reply to Cadillac's Northstar V-8.) The only question involved styling: Would buyers prefer the Conti's lozenge look or the more formal sharp-edged Cadillacs? The answer came quickly. Continental sales started slowly, about 45,000 in 1995, and continued at a modest pace that was well below expectations.

Added during the first full production year was a Personal Security Package comprising Lincoln's RESCU System -- a cell phone link to a special emergency operator -- and Michelin run-flat tires. But that ­didn't help turn the tide. Neither did a considerable $4600 price cut for '96, when a traction-control system became standard. It was clear to all concerned that stronger measures were needed.

They arrived with a 1998 redesign that made a substantial change in the Continental's character. Realizing a heavily sculpted look was no less controversial here than on parent Ford's latest Taurus, Lincoln designers went conservative, applying simple rounded sides and a more upright frontal aspect, plus shorter front and rear overhangs. The driver-adjustable suspension was relegated to the options list, where it was paired with a few minor features to make a Driver Select System. Otherwise, it was conventional shocks and simple rear load-leveling suspension, though the three-mode power steering remained standard. Model-year production rose by some 4000 units from '97, but that qualified as disappointing.

After gaining 15 horses for 1999, the front-drive Conti cruised on without major change. The RESCU option was dropped for 2001, then returned as a Vehicle Communications System. Also for 2002, as with other Dearborn products, major options were repackaged as "models": in this instance base, Driver Select, Personal Security, and Luxury Appearance (a gussied-up Driver Select). Signing on later was a $1550 Collector's Edition package with leather/suede interior and chrome wheels.

That suggested the Continental was about to exit. Sure enough, it didn't return for 2003, mourned no more than the Mark VIII was. Sales had been declining each year since 1998, and were down to less than 15,500 by calendar '02. Several factors were at work, including a broad ongoing buyer shift from cars to sport-utility vehicles all across the price spectrum. But the main problem was ever-stronger competition from import-brand cars with more prestigious nameplates. In the end, the front-drive Continental was a competent upscale sedan that ultimately couldn't cut it in a very cutthroat market.