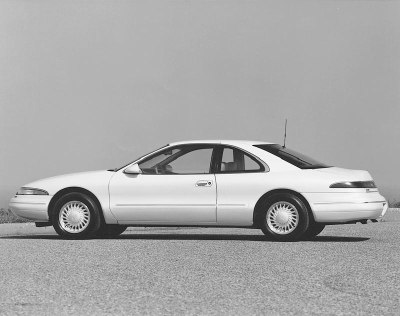 The Lincoln Mark VII just marked time before closing out after the 1992 model year. The only interim change was upgrading the Bill Blass model to the same steering, suspension, tires, and alloy wheels as the sporty LSC. Mark sales plunged from more than 22,000 for model-year 1990 to just 15,000 for 1991 and '92 combined. There were two reasons for the decline. First, the Mark VII had been around nearly a decade -- and looked it. Second, a brand-new Mark was waiting in the wings.

Arriving for 1993 as a single well-equipped coupe, the Mark VIII was even sleeker, smoother, and more "aero." It made the VII seem almost stodgy. Styling nodded to Mark heritage with a vertical-bar grille and trunklid tire hump, but both were sized and shaped to complement the overall design. Though certain design elements were debatable -- especially the "predented" bodyside concavities -- this was the most exciting Lincoln yet.

Structurally, the Mark VIII owed much to the latest MN12 Ford Thunderbird/Mercury Cougar, but was different enough to merit its own internal code, FN10. Compared to the Mark VII, it was 4.5 inches longer in wheelbase (using the 113-inch Thunderbird/Cougar span), 4.1 inches longer overall, and 3.7 inches wider, yet was actually 30 pounds lighter at the curb despite dual airbags and other added features. Engineer­ing was more sophisticated than ever, with all-independent air-spring suspension a la Continental, speed-variable power steering and optional Traction Assist. Under the hood lurked a potent new engine: the promised twincam version of the "mod" V-8. Displacement was still 4.6 liters (281 cid), but a 32-valve aluminum cylinder head helped deliver a smashing 280 bhp and 285 pound-feet of torque. A four-speed automatic remained the only transmission, but gained electronic shift control. And for the first time, Mark drivers worked the shifter from a center console, part of a sweeping new "cockpit" dash wrapped in from the center to give a "fighter plane" feel.

The Mark VIII could almost fly like a jet. Despite giving away 15 horses to Cadillac's Northstar-powered Eldorado Touring Coupe, the Lincoln proved decisively quicker in Consumer Guide® tests, posting a 0-60-mph time of just 6.9 seconds versus 7.7 for the Eldo. But more than just straightline go, the new Mark set a new high for Lincoln roadability. Cornering was flat and stable, steering fast and informative, braking swift and sure. It also featured a unique air suspension that lowered the car at highway speeds for greater stability. About the only things not to like were certain ergonomic details and less total space than expected in a car of this bulk.

In all, the Mark VIII was a revelation: fast, supremely capable, quiet, luxurious, and comfortable. It was a very different Mark, but also even more of a match for BMW, Mercedes, and Japanese upstart Lexus. Considering that, price was a real eye-opener at well under $37,000 to start, thousands less than comparable grand luxe imports. Buyers responded by taking ­nearly 32,400 of the '93s and 28,000-plus for '94. The '95 tally was lower, but so was overall demand for luxury coupes.

Hoping to buck that trend, Lincoln revived the LSC badge for an even hotter Mark VIII, announced for 1995 but not available until model-year '96. Dual exhausts netted 290 bhp, while a firmed-up chassis gave more tenacious handling and roadholding. But this did nothing for Mark sales, which slipped again.

The tally went up slightly for '97, when the Mark got a ­serious freshening. A new hood and grille (flanked by high-­intensity xenon headlamps) tilted the visual effect from "aero" back to "formal," and a reshaped tail sported a full-width neon light bar instead of incandescent bulbs. Among other changes were reshaped seats, standard power tilt/telescope steering column, brighter dashboard lighting, and the addition of wood cabin trim, which seemed at odds with the original "high-tech" design theme. The chassis gained uprated shock absorbers, larger antiroll bars and standard traction control. The LSC got even sportier calibrations and an extra 10 bhp. But the luxury-coupe market kept shrinking, so Lincoln decided to cancel the Mark VIII after 1998, when production was down to just 6100 units.