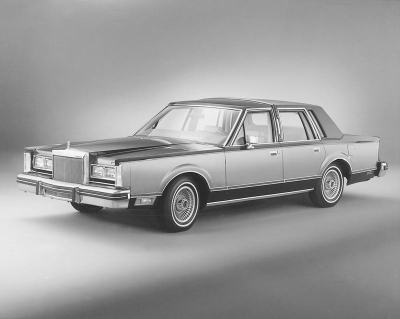 The 1980 Lincoln Town Car was a harbinger of the success Lincoln would enjoy throughout the decade.

A second fuel shock occurred in 1979, touching off a deep national recession that drastically reduced 1980 volume throughout the industry. Lincoln suffered more than most, its model-year total sales skidding to just under 75,000 -- nearly 115,000 below '79. The underwhelming Versailles was in its final year and found fewer than 5000 buyers.

The 1981 result was even worse, falling to about 69,500. But that would be the decade low, and Lincoln followed the overall market in making a strong recovery. By 1985, it was up to some 166,500. Output dipped the following two years, then rebounded to over 215,000 through 1990. More important to proud division managers, Lincoln passed Cadillac in 1988, only to lose that position, but Ford's finest remained competitive with its arch­rival despite offering just three distinct models to Cadillac's five.

Remarkably, much of this success was owed to a single 1980-vintage four-door that saw only one major change through 1989: a rounded-corner "aero" facelift for 1985. Called Town Car after 1980, it soldiered on following the cancellation of the 114.3-inch-wheelbase Town Coupe after '81 and the Mark VI duo after '83. The throttle-body fuel-injected 302-cid V-8 was the only engine available after 1980, but it would be upgraded. After an '84 boost to 140 bhp came more sophisticated multi-point fuel injection that ­lifted horsepower to 155. Trim and equipment shuffles were the only alterations in most years.

But it didn't matter: At 50,000-100,000 units annually, this series outsold other Lincolns by margins of 2-to-1 or more -- sometimes upwards of 5-to-1. Yes, the Town Car was smaller than its late-'70s predecessor, but it proved that traditional Detroit biggies still had a place in the '80s. As Mark Twain would have said, reports of their demise (in the wake of "Energy Crisis II") were greatly exaggerated.

Such consistent popularity was remarkable for this large, rela­tively old-fashioned car. Though Cadillac remained the luxury sales champ, its lead over Lincoln dwindled as the '80s progressed. One reason: An increasing portion of Cadillac sales depended on smaller "big" cars that looked too much like cheaper GM models and lacked the Town Car's sheer presence. Lincoln was quick to play up its rival's "lookalike" problem in snobbish TV commercials designed to pull in more and more "conquest" sales. Chrysler, meantime, had nothing remotely like a traditional full-size car after 1981, though its midsize Fifth Avenue found a steady market for the same reasons Town Car did: plentiful creature comforts in a package that "mature" buyers could relate to, all at reasonable prices. Of course, stickers swelled a lot on all cars from 1981 to '89 -- in the Town Car's case from about $14,000 to about $25,000. But relatively speaking, this Lincoln remained a good buy, and the public's "pocketbook vote" confirmed it.

If the late-'70s Versailles was a hasty reply to Cadillac's Seville, the new compact Continental sedan of 1982 was a more-considered response. It even had "bustleback" styling like that of the new 1980 front-drive Seville, plus a Mark-type grille and the usual base, Signature Series, and designer-edition trim and equipment variations.

Underneath, though, it was just a heavily modified Ford Fairmont with an extended-wheelbase version of the same rear-drive "Fox" platform -- and it was really none the worse for it, except perhaps for rear-seat room, which was limited. A 232-cid V-6 was offered in the debut '82s, but proved somewhat weak for their weight, so most left the fac­tory with injected 302 V-8s of 130, 140, or 150 bhp (the last adopted after 1985). The front and rear ends were smoothed out for '84 a la Town Car, the only appearance change for this design generation.

The compact Continental was far more successful than the Versailles it effectively replaced, selling an average 21,000-26,000 a year through 1987. If not a vast aesthetic improvement, the bustleback sedan was more roadable and enjoyable, well put ­together, and as posh as any Lincoln. And at $21,000-$26,000, it, too, represented good luxury value.