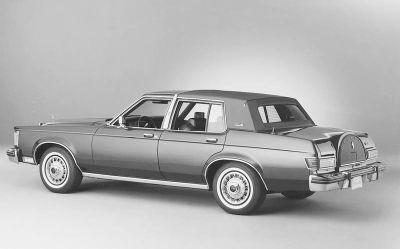 Model-year 1977 also saw Lincoln move into the luxury-­compact class, its first response to the radically changed market left behind by the energy crisis. Called Versailles, this was a hastily contrived reply to Cadillac's remarkably successful 1975-76 Seville. It was little more than an everyday Ford Granada/Mercury Monarch adorned with a Continental-style square grille, a stand-up hood ornament and humped trunklid, plus more standard equipment. Established Lincoln buyers looked askance at the plebeian origins (which the press never failed to mention), while buyers balked at the $11,500 price. You can only fool some of the people some of the time, and Lincoln didn't fool many with this one. Versailles' 1977-model sales were a mere 15,434, a fraction of Seville's.

This basic three-car squad held the fort for 1978-79 while Lincoln readied a troop of downsized 1980 models. Amazingly, the big cars continued to sell well, defying the combined threat of further fuel shortages and a fleet of luxury intermediates from lesser makes. Part of this was due to circumstance. By 1979, anyone who wanted a truly large luxury car -- "traditional-size," Lincoln called it -- had precious few choices.

One of Lincoln's most successful marketing ploys in the '70s was the Designer Series. American Motors had tried something similar with Gucci Hornets and Pierre Cardin Javelins. As a luxury make, however, Lincoln was in a much better position to exploit the snob appeal of haute couture brands. First seen for 1976, these extra-cost packages were decorated inside and out with colors and materials specified by well-known high-fashion designers. The schemes varied somewhat from package to package and year to year, but the results were invariably striking and usually pleasing. Perhaps the most consistently tasteful was the Bill Blass edition, a nautically inspired blend of navy-blue paint and eggshell-white vinyl top outside and navy velour or dark blue-and-cream leather upholstery inside. Other combinations were created by Hubert Givenchy (generally tur­quoise or jade), Emilio Pucci (maroon and gunmetal grey), and Cartier (champagne/grey). The last, of course, was not a designer but the famous jeweler.

Following a spate of limited-edition 1978 packages to mark Ford Motor Company's 75th anniversary, Lincoln devised a "Collector Series" option group for the '79 Continental and Mark. Both were adorned with appropriate nameplates, gold grille accents, special midnight-blue metallic paint, and a host of "custom" accoutrements such as color-keyed umbrella and leather-bound owner's manual and tool kit. It marked the end of an era: The day of oversized Lincolns was over.

So, too, it seemed, any differences between Continentals and Marks. The 1980s were much more alike, but also much more sensible. Lincoln now adopted the "Panther" platform introduced for '79 with the full-size Ford LTD and Mercury Marquis as the basis for a substantially smaller Continental and an upmarket Mark VI sibling, thus resuming its 1958-60 practice of fielding two versions of one basic design. Compared to their immediate predecessors, these cars were up to 10 inches ­shorter between the wheels and significantly lighter. Yet they were nearly as spacious, thanks to only marginal reductions in width, plus taller, boxier styling.

Each line retained its usual appearance cues, but not the usual big-block engines. Standard for both was the corporate 302-cid small-block V-8 in new 129-bhp fuel-injected form; a 140-bhp 351 was the only option. It was all for the sake of economy, as was Ford Motor Company's new four-speed overdrive automatic transmission, basically a three-speed unit with a super-tall fourth gear added (0.67:1). Handling was more competent, thanks to a revised suspension, and refinement was emphasized with retuned body mounts and suspension bushings, plus standard high-pressure radial tires, which also helped eke out slightly more mpg. A pillared four-door Mark returned for the first time since 1960, and the various designer editions were bolstered by a new Signature Series much like the pre­vious Collector option.