The Evolution of the Lincoln Model K 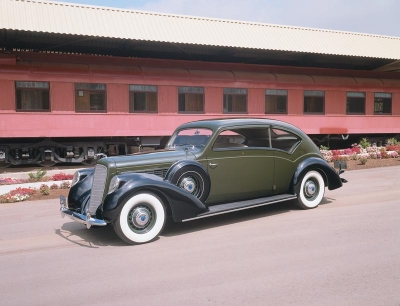 The artistic Edsel Ford transformed Lincoln styling, updating the standard factory-built bodies, and secured a plethora of custom and semicustom styles from the cream of America's coachbuilders, including Brunn, Dietrich, Judkins, LeBaron, Murphy, and Willoughby. The result was some of the finest expressions of Classic-era design and an evolution of the Lincoln Model K. A cautious move toward streamlining began with the 1932 models and was more evident on the '33s, which wore a rakish Vee'd radiator with a chrome grille. Also new that year were hood louvers (replacing shutters), drawn-down "skirted" fenders, Vee'd front bumper, and redesigned trunk racks.

With sales slow in the Depression-ravaged market, Lincoln consolidated for 1934 around a single 414-cid V-12, a bored-out KA unit with the same 150 bhp as the old 448. Differences included aluminum cylinder heads and 6.3:1 compression. The latter was unheard of at the time, but made possible by the advent of 70-octane gasoline, which was nearly as potent as contemporary aviation fuel.

Most 1934 Lincolns could reach 95 mph, helped by the 414's broader rev range compared to the 448. Chassis specs were virtually unchanged, but Murray custom bodies were eliminated and radiators were now lacquered in body color. Smaller headlamps, parking lamps, and color-matched metal spare-tire covers helped clean up appearance. Sedans and limousines also received sloped tails, fairly radical for the day. Like Pierce, Packard, and Stutz, Lincoln was reluctant to abandon the graceful "oh gee" fenders so characteristic of the period -- but it would after 1935.

By that point, big-Lincoln engineering was in the essential form it would carry through 1940. The slightly smoother-looking 1935s were all called Model K, and a vast array of body types was still available on the previous two wheelbases. Semi-teardrop fenders appeared for '36, along with a simpler radiator, new disc wheels, and larger hubcaps.

The 1937s emphasized absolute styling simplicity, possibly influenced by the Cord 810. Headlamps were integrated into the fenders, belt moldings were erased, and doors were extended down almost to the running boards. Spare tires lived within new built-in trunk compartments (unless sidemount spares were ordered), and factory bodies received their first Vee'd windshields. As ever, standard Model K interiors were done with rich broadcloth and curly-maple garnish moldings; rarer woods and fabrics were available in custom styles. The V-12 gained hydraulic lifters and moved further forward, which improved ride. Nominal horsepower remained 150, but post-1936 models probably had more usable power because of a different cam contour.

The lush luxury-car market of the 1920s had long since dried up in the economic drought of the '30s, and Lincoln suffered as much as any premium make. Annual sales hovered around 3500 from 1930 through '33, then dropped by about half in 1934. After that, the K-Series would see no more than 2000 units per year. By 1940 it was available only by special order, built on chassis completed during 1939. (The largest of these, the 160-inch-wheelbase "Sunshine Special," served as the parade car of presidents Roosevelt and Truman.)