Limelighter: Profile of a Custom Car 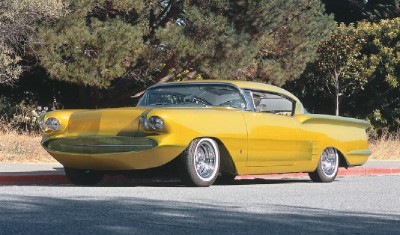 The Limelighter, a custom car originally built by Bill Cushenbery in 1964 for Frank Gould of Hollister, California, illustrates common customizing trends as the practice progressed into the 1960s.

Starting with a 1958 Chevy Impala hardtop, Cushenbery completely reconstructed both the front and rear fascias. Up front, the stock bumper, grille, and headlight trim were replaced with Lucas headlamps deeply tunneled into peaked "pods," a wildly sculpted rolled pan, and a hand-formed grille shell backed with expanded metal mesh.

Out back, the rear bumper and taillights were replaced with tunneled handmade taillights and a rear rolled pan with integrated exhaust ports and a "grille" that matched the front-end design.

In addition to shaving all of the stock trim, Cushenbery molded in and resculpted the Impala's trademark roof scoop and "pitchfork" faux side scoops. The radical bodywork was topped off with a dazzling candy lime-gold paint job with subtle emerald-green fade accents.

Bud Millard restored the interior of the Limelighter which still sports the original 1950 Nash instrument pods.

Inside, the stock dashboard was replaced with an airplane wing strut supporting two 1950 Nash instrument pods. The wild steering wheel was actually a stock piece from a 1960 Oldsmobile.

A hand-fabricated center console held the radio, various control switches, and a 1957 Oldsmobile instrument panel. The Limelighter's original build cost came to approximately $10,000, a substantial sum at the time.

Like so many famous customs, the Limelighter changed hands several times after its glory days on the show circuit and eventually fell into disrepair. After years of tracking its whereabouts, Bud Millard of Millbrae, California, was able to acquire the remains of the car in 1998.

He sent the custom car to Bill Cushenbery, then living in Bakersfield, California, to have him restore the car he originally built more than 30 years earlier.

Sadly, Cushenbery soon fell ill and passed away before he could begin. Bud then sent the Limelighter to OZ Kustoms in Oroville, California, for the restoration work. Bud took several creative liberties with the restoration and had the OZ crew incorporate several updates.

Bud Millard converted the Limelighter's taillights to LEDs and added a third brakelight on the roof.

The top was chopped two inches, an LED third brake light was added to the roof scoop, and the taillights were converted to LEDs as well. The grille detail was altered by the deletion of the Lucite parking lights and the addition of a slim chrome grille bar.

The now-scarce Astro chrome slotted wheels and U.S. Royal Master tires were replaced with chrome-reversed wheels on radial whitewalls. A modern airbag suspension system was installed for an even lower ride height.

Inside, digital gauges and modernized upholstery were added. Despite the changes, the overall essence of the Limelighter was preserved, and the restored custom car stands as a living testament to Cushenbery's ­pioneering ­techniques.