How the Lexus LF-LC Works 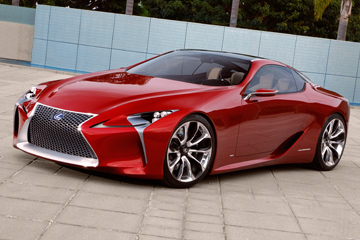 Whether or not you think the outrageously contoured LF-LC Concept by Lexus actually captures perfection, it certainly arrests the eyes. It also represents another entrant in a growing list of upper-price range, environmentally minded exotics. That's right, it's a hybrid.

The Lexus LF-LC Concept "officially" debuted Jan. 9, 2012, with the opening of the North American International Auto Show, better known as the Detroit Auto Show. While Lexus hadn't announced at the debut any specific plans on whether it would make a production version of the LF-LC, it's already clear that the vehicle has been and will continue to shape the looks and technologies of Lexus models to come.

It all began when the honchos at the Lexus Center in Japan ordered the division's Calty design center in Newport Beach, Calif., to design from scratch a futuristic hybrid sport coupe. And, the mandate went, were it to be mass produced some day, it should be within reach of the merely well-to-do and not limited to just the filthy rich (unlike the $375,000 Lexus LFA supercar). As one Lexus official put it in an online video about the LF-LC, even if you could afford the LFA, the chances of getting your hands on one are slim because of its limited production.

In this article, we'll spill what's known about the hot new hybrid, the LF-LC, so far.

We'll start with the most obvious element of the LF-LC, its jaw-dropping exterior design. Floor it to the next page to learn more. 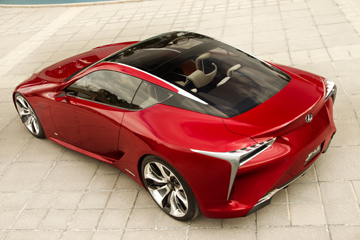 Take a gander at the Lexus LF-LC head-on and one of the first things to grab your attention is its enormous hourglass grill. That grill's shape, which Lexus refers to as its "spindle grill" motif, has polarized opinions in the automotive press and among automotive enthusiasts. Some have suggested it's a face only Pac-Man's mother could love. But like it or not, it appears to be staying a while in the Lexus family lineup. You can see other versions of this pronounced proboscis on the Lexus GS high-performance sedan and other Lexus models rolling out in 2012.

Lexus calls the spindle grill a "resolute look" that embodies the Lexus design philosophy the company has labeled L-finesse.

The company states on its Web site: "L-finesse is the design philosophy for Lexus, unifying core messages yet expressing the identity and character of each model - while the spindle grille we see today is clearly a pure incarnation of L-finesse, it is also a starting point. This is a new beginning -- and the evolution continues" [source: Lexus].

To ensure there was cohesiveness to all the design elements inside and out on the concept car, Lexus designers created a new form language, or design code to use amongst themselves, called "fluid precision design." With it, designers were able to integrate the very different design themes of high-tech gadgetry and nature-inspired shapes.

For their efforts, the designers of the LF-LC were honored by a jury of their automotive design peers, who awarded the LF-LC an Eyes on Design Award for Design Excellence.

The LF-LC's headlights -- always a prime focal point through which to convey a car's personality -- both feature tri-beam HID-style projector beam lamps, augmented by artfully arranged LEDs. The running light LEDs are purposefully oriented to subtly form the shape of a tilted letter "L" on either side. The vertically aligned fog lamp LEDs are arranged in a unique dot-matrix pattern.

Swinging around to the side to view the car in profile, the LF-LC's athletic intent becomes markedly more apparent. Its long hood and curvy fender arches form ribbons of sculptural sheet metal that showcase a panoramic glass-encased passenger cabin.

The rear of the car continues with the strong graphical theme, with holographic tail lights and a set of rear fog lights that mirror the pattern at the car's front. Whereas many car cabooses appear to be a design afterthought, the LF-LC's hind quarters look to be every bit as carefully wrought as the front.

Certain touches, like the overall curvaceousness, hint at something European -- the design firm Pininfarina comes to mind. But the LF-LC was penned in-house, developed at the Lexus Calty design studio in California.

As you might have guessed, Lexus didn't leave all the eye candy of the LF-LC on the outside. To see how sumptuous this concept's interior is, continue to the next page. 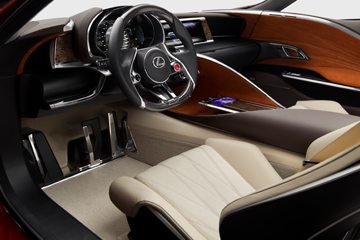 Both inside and out, the Lexus LF-LC is strongly infused with an organic design sensibility. The flowing, organic shapes that mark its exterior continue inside the vehicle. The LF-LC softens its high-tech interfaces by infusing the cockpit with materials that feel as good as they look.

While leather and suede swaddle the driver and passenger in their seats, polished wood and brushed metal accents speak of class and luxury on trim pieces.

The HMI, or Human-Machine Interface, includes race-inspired steering wheel and floor pedals, as you might expect. But don't go looking for lots of switches and knobs to control your experience in the cabin. Electronic monitors and touch screens abound. Two 12.3-inch (3.1 decimeters) LCDs show important information such as navigation and climate control, while a force-feedback touch screen in the center console provides no-look control so that the driver can maintain his or her focus on the road ahead.

Even the venerable power window switch has gotten the boot in the LF-LC. If you want to feel a fresh breeze while you drive, use your finger to gesture in a "window down" motion on a touch screen.

Clearly, the LF-LC is a high touch, as well as high-tech experience. To see some of its other technologies, continue to the next page. 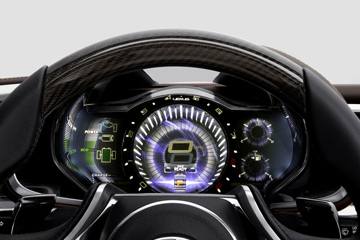 Lots of technology went into the making of the Lexus LF-LC, and we're not just talking about the touch screen-activated seat adjusters. Remember those organically flowing lines? Well, they were actually inspired by a leaf.

In coming up with the overall shape of the car, designers scanned into their computers a tall, striking leaf that caught their fancy. From that two-dimensional outline, they extruded three-dimensional shapes to which they could add necessities such as fenders, wheels and a roof.

Beneath the hood of the LF-LC is a propulsion system that Lexus refers to as Advanced Lexus Hybrid Drive. Lexus obviously has benefited from parent company Toyota's many years of experience with hybrid engines. But the "magic," according to Lexus, of its latest hybrid system is that its engine management computer can intelligently optimize power distribution duties between the electric motor and internal combustion engine for greatest performance and efficiency.

Lexus claims this ability "future-proofs" its hybrid technology for whatever type of fuel source predominates in the post-petroleum era [source: Lexus].

By now you're perhaps wondering if this car has the "go" to match its amply-demonstrated "show." Or maybe you're curious to know how ecologically green such a mean-looking machine can actually be. To get some of the specifications on the Lexus LF-LC, check out the next page. 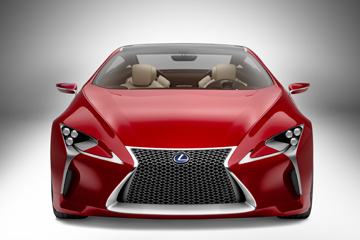 With concept vehicles such as the LF-LC, hard performance numbers are usually unavailable and in any case, irrelevant (since you'll never get to drive the actual concept). So following are a few specifications we do know about the car:

For lots more information about concept cars and other automotive technology, go to the next page.