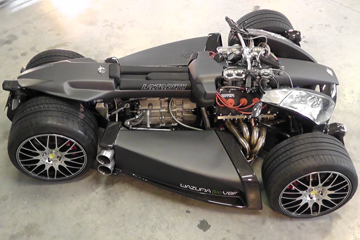 Lazareth is known (in so far as anyone is really intimate with French exotic motorcycle specialists) for its sleek and sexy, super powerful motorcycles. Photos of Lazareths don't always look real; they sometimes have an otherworldly glow, like a particularly surreal piece of a movie set. Sometimes they are. Lazareths are so distinctive and superhero-worthy that the firm's been tapped to create bikes for a number of different films. The one most talked about is "Babylon A.D.," perhaps because Vin Diesel looks right at home riding or driving just about anything.

So how does such a sweet bike get made? Like many high-end motorcycle designers, Lazareth blurs the line between being a motorcycle builder and a motorcycle customizer. To some, there's no distinction between the two -- and as long as the end result is good (and customers are willing to pay for it), what difference does it make? Builder, customizer...when it comes to a company like Lazareth, the definition would really vary by product. Customizing implies that an existing vehicle is undergoing changes (though they can be quite extensive, involving upgrades to the body and to the mechanical components). Generally, a builder is understood to be creating a whole new vehicle from a pile of parts (the source of those parts doesn't really matter -- they can be off-the-shelf, pulled from other vehicles, or custom engineered and built). And if you're in the market, you're probably already aware that both approaches require deep pockets.

The Wazuma's particularly interesting because it's available in a handful of different configurations, and follows a fairly typical Lazareth formula: A vehicle frame is dolled up with a variety of really expensive and powerful parts. Lazareth isn't known for simplicity, economy or sacrifice. Everything is chosen because it is the best that can be had, and the Wazuma is the latest and most over-the-top example. 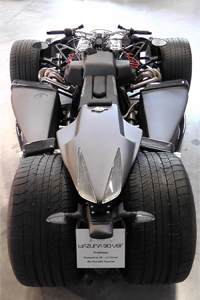 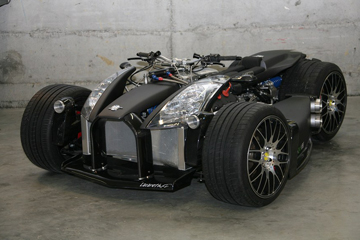 We know where Wazuma came from, but what about Lazareth?

The other half of the name had to come from somewhere, of course. And it came from the firm's founder, an actual person: Ludovic Lazareth.

Intrigued by vehicle design, he studied automotive prototyping at the Espace Sbarro School. As a result of this background and experience, there are notable differences to Lazareth's approach. According to Lazareth's site, most vehicle designers start with computer software that allows them to tweak their desired shape. Lazareth, by contrast, prefers to dive right in and start working with materials. Refinements are applied directly to the rubber, plaster or clay -- not to a monitor. Once Lazareth is satisfied with the vehicle's body, molds are made for the actual production process. Only then are computers brought in to ensure the engineering and mechanical elements are in harmony with the body. This approach, according to Lazareth, celebrates the artistic side of vehicle design, even though it eschews the traditional sketching and drawing steps.

Though Lazareth earned his street cred by modifying Yamaha VMAX motorcycles, churning out one after another, his prowess isn't limited to bikes. His shop has been around since 1998, and has racked up a solid portfolio of other automotive projects. Customers with more mild tastes (or with less courage) can get the Lazareth flair on a vehicle of their choosing. Lazareth also provides complete restoration services to classic vehicles. If a clean, straightforward refurbishment is too sterile for your tastes, you can give Lazareth the all-clear to get a little liberal with your restoration project.

The Lazareth Web site tends toward the grandiose (especially the English translated version, which proclaims solemnly of the Wazuma, "Everything is enormous." The factory in Annecy-le-Vieux, France, hand-builds each vehicle and each one is made to order. In other words, when you order your Wazuma, you're told when it'll be done, usually a few months from the order date. In the meantime, your vehicle's parts are assembled (including the custom-made body) and your Wazuma will be built by hand. Wazumas are also given individual serial numbers.

The Lazareth Web site states (as translated), that a Lazareth vehicle provides "a pleasurable and exclusive ownership experience." Leave it to the French: even what was once thought of as crass can be turned into couture. ATVs aren't just for trail riding anymore.