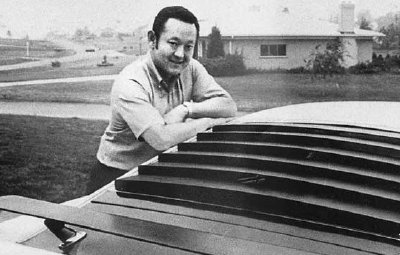 Larry Shinoda brought to Ford a sense of no-nonsense car-guy cool. His work on the 1969 and 1970 Ford Mustang Boss 302 is all the evidence that statement requires.

Ford Vice President of Design Eugene Bordinat gave the always-outspoken Shinoda his first automotive design job, in 1954, only to see the new graduate of L.A.'s Art Center School leave Dearborn within a year. After a brief stint at faltering Packard, Shinoda was hired by General Motors design boss Harley Earl and was soon working with Bill Mitchell, who soon succeeded Earl, on futuristic concept designs -- and future Corvettes.

Shinoda followed GM president and longtime friend Semon E. "Bunkie" Knudsen in jumping to Ford, in 1968, but both were fired after less than two years in a widely publicized shake-up. Even so, both left their mark on Mustang, the designer most famously with the fast, tight-handling Boss models of 1969-71. Shinoda and Knudsen went on to form RV maker Rectrans, then parted company in mid-1975, when Shinoda opened his own design business. Shinoda died in late 1997 at age 67. Here, in Shinoda's own words, is the story of his work on the Boss 302:

One of the first things I did on coming to Ford was straighten out the Boss 302. They were going to call it the SR2. They had all this chrome on it. They were going to hang big cladding on the side, big rocker moldings. It was going to be more garish than the Mach 1. They had a big grille across the back and a great big gas cap and fake cast exhaust outlets and big hood pins and a really big side scoop. I took all that off, went to the C-stripe decal and painted out the hood, did the rear spoiler and the window shades and front airdam. That vehicle ended up being a profit-improvement program. They only built a few, but they made money on each one.

Shinoda was instrumental in simplifying the design of the 1969 Boss 302.

Bunkie Knudsen and I knew that to capture some of the youth market you had to have street machines that would run like your race cars. Ford had never done that before, and obviously Knudsen wanted to beat the Z-28 Chevrolets at their own game. So that was my first task coming in there, doing show cars, and getting the Boss going. I knew what kind of horsepower the Z-28 had, where its strong points and weak points were. So I had to find out quickly what the Mustang was all about and what the new developments were.

And what they were working on was pretty much wrong. They had an engine with high horsepower but enormous ports, so the power was very, very peaky. They needed something with a much flatter torque curve. And they needed better vehicle dynamics. They were saying, "All it has to do is go fast." I said, "That's not really where it's at. The Z-28 gets through corners well because it handles well. And it accelerates well off the corner because it got through the corner faster, so you think it's got more horsepower than it does. Another reason it's going through the corner faster is aerodynamics. It has enough downforce in front, balanced with downforce at the rear. Your car has some downforce at the rear with a little built-in spoiler, but not in the front. And the suspension isn't quite right."

They said, "What do you know about it? You're a designer." I said, "I'm a designer, but I've also got common sense, and I know a little bit about vehicle dynamics." Ford at that point had never used their skidpad to check out dynamics. Their skidpad at the Dearborn test track was all torn up at the time. I got an appropriation to repave it.

The Boss 302 was the only 1970 Mustang to record higher model-year production. Sadly, the Boss 302 would not return for a third racing season.

I took some people in a company plane and flew them over the GM Proving Grounds. I said, "See that? It's Black Lake." "What's it for?" I said, "You'll see." Sure enough, here's Roger Penske's Trans-Am Camaro, the Sunoco Camaro, running on a skidpad. I said, "That's what you need. You play with aerodynamics, suspension, roll stiffness, and tires, and you find out what's going to get around there the fastest. Of course, you'll have to do some adjustments at the race track." In those days, most of the people in Ford's performance department didn't understand vehicle dynamics, which was kind of sad. The people at Chevrolet and, basically, Frank Winchell, wrote the book on that.

And as I said, I removed all the inappropriate things they were going to put on the Boss, including the interior. I think it saved quite a few dollars when we counted it all up. Don Petersen, who was in product planning at the time, got a big kick out of that. He said, "You trying to do our job for us?" I said, "No, just trying to do the job, period."

But there was only so much he could support. Unfortunately, I made bold statements. When someone asked me, "What are your ambitions?," I said to be the first Japanese-American vice-president at Ford Motor Company. I don't think Gene Bordinat liked that.