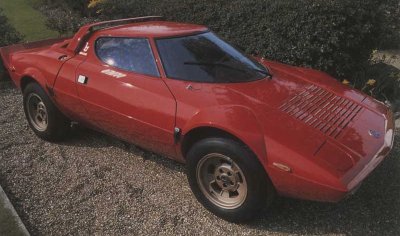 Though conceived strictly for rallying, the distinctive Lancia Stratos makes an exciting road car, though it’s far from GT standards in luxury and refinement.

By any standard, the Lancia Stratos was a big success both in and out of competition. Developed as a homologation special for European rallying, it became a cult car after production ceased and is now highly prized as the “modern classic” it is.

The Stratos had no direct ancestors, strictly speaking, though its midships drivetrain was lifted intact from Ferrari’s Dino 246 GT. Here it’s important to recall that in 1969, Fiat took over Lancia, then in financial trouble, and also acquired 50 percent of Ferrari.

European rallies had been Lancia’s main motorsports venue since the early Sixties, competition that remains much faster, rougher, and tougher than most American-style rallies. The firm’s standard-bearer, the front-drive Fulvia coupe, was becoming outclassed by 1970. The Stratos was developed to take over for it and make Lancia the outright world rally champ.

As ever, there was a minimum production requirement: 500 units, an awkward figure that would necessitate funds for at least semi-permanent tooling as well as design and development. In short, this was a specialized job of the sort long familiar -- and thus well suited -- to the Italian industry.

The cockpit of the Lancia Stratos was purposed/designed for fast forest flying.

Fiorio, having studied every possible powerteam in the Fiat/Lancia group, secured 2.4-liter V-6s and 5-speed transaxles from Ferrari -- an ideal choice, as they’d be installed exactly as in the Dino 246. All-independent suspension, rack-and-pinion steering, and four-wheel disc brakes were all specially designed. By November 1971, a prototype was ready for display at Turin.

Bertone’s body design was chunky and stubby yet somehow wicked -- and predictably minimal, to hold down weight and bulk. Its most distinctive features were semi-concealed A-pillars and a door beltline sharply upswept to the top of the daylight opening. The shape of the resulting unbroken expanse of glass gave the tunnelback roof the appearance of a futuristic crash helmet.

Like the chassis, the main body structure was steel; weight-saving fiberglass was used for tilt-up nose and tail sections. Cargo space was provided by a small box above and behind the powertrain, but the spare wheel precluded any up front. Speaking of helmets, bins were molded into the interior door panels for storing them. Door windows swivelled downwards. Footwells tapered markedly inward.

Stratos prototypes took to the rally circuit in 1972, but didn’t score a major victory until the Spanish Rally of April 1973. Another year passed before the roadgoing “production” model appeared. Then, with a rush, Bertone and Lancia built 492 cars before September. Thus homologated (for the Grand Touring class of Group 4), the Stratos went on to win the World Rally Championship three years running -- 1974-76. Its last major win came in 1979, when a Stratos entered by the Monaco importer won the famed Monte Carlo Rally.

With 190 horsepower in roadgoing trim, the Stratos could exceed 140 mph. With nicely balanced, if slightly nervous, handling, it was as different from, say, a Corvette as a Derby winner is from a plow horse, the kind of car with which you had to become thoroughly familiar before you could really drive flat out. As with the compact mid-engine Ferraris, however, the Stratos was addictive, and most owners fell in love with it.

To learn more about Lancia and other sports cars, see: