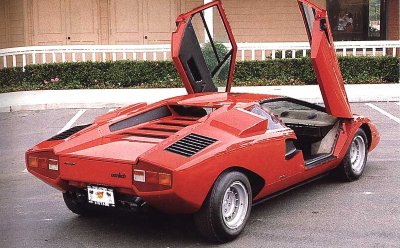 Lamborghini’s follow-up to the Miura took the mid-engine supercar to its carnivorous extreme. It was called Countach, an Italian slang that roughly translatesto “That’s it.” It turned out to be Lamborghini’s biggest seller ever. See more pictures of Lamborghini sports cars.

With the Lamborghini Countach, lightning struck twice. Fortunate is the automaker that fields one unprecedented design; at the 1971 Geneva motor show, tiny Lamborghini unveiled its second. The Miura’s successor had science-fiction looks and otherworldly performance. By the time it went into production in 1974, motoring’s outer limits had a new address: the Lamborghini Countach.

Its wheelbase was shorter than the Lamborghini Miura’s and instead of a unitized central steel shell, the Lamborghini Countach had a welded-tube chassis supporting a non-stressed aluminum skin. Styling was again the work of Marcello Gandini, but where his Miura was all luscious curves, this new car took the wedge profile to its extreme. Asymmetric rear-wheel arches, “scissor” opening doors, and immodest vents and scoops iced the fearless package. “The Countach,” said Britain’s Car magazine, “breathes naked aggression from every pore.”

In practice, the shovel nose killed any hint of high-speed lift, and the scoops fed radiators logically located in the rear flanks. The Miura’s transverse V-12 was cleverly rotated to face rearward. This put the shift linkage under the driver’s hand for smoother action and rearranging the drivetrain mass for safer cornering and better containment of heat and noise. The Lamborghini Countach (COON-tahsh) was even quicker and handled better than the Lamborghini Miura, but it was an automobile that demanded real commitment.

Lifting the doors was a chore, and getting in or out required sliding over broad sills that harbored the fuel tanks. Footwells were narrow and angled, the windscreen acted as a greenhouse, only part of the side glass opened, and visibility was awful. But few contemporaries were as fast, and none was as wanton. This car, wrote journalist Pete Lyons, “treats velocity with the same casual contempt it does society.”

The Countach's muscular V12 engine is similar to its Miura counterpart, though it was cleverly rotated rearward for smoother shifting and cornering.

Fuel injection in ’86 made the Countach U.S. smog-legal for the first time since the ’70s, but the car carried ugly federal bumpers. Chrysler bought Lamborghini from interim Swiss owners in 1987 and oversaw the release of the final Lamborghini Countach, the 455-hp Anniversary Edition. With 650 built from 1988 to 90, this was the most popular, most refined, and possibly the fastest Lamborghini Countach: 0-60 mph in 4.7 seconds and 183 mph all out.