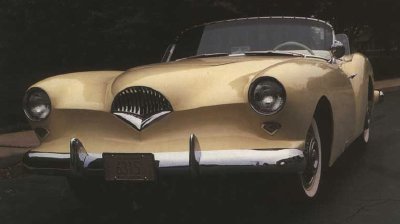 The high, shell-shaped grille of the Kaiser-Darrin looked to one wag like “it wanted to give you a kiss,” and was mimicked in small parking lamps.

By 1952 the Kaiser-Darrin's future designer, Howard A. “Dutch” Darrin, had had it with Kaiser-Frazer. He’d resigned after Willow Run’s “orange juicers” meddled with his original 1946 K-F sedan, only to return in 1948 to style the pacesetting ’51 Kaiser. But when the firm chose a much dumpier design for its Henry J compact over Darrin’s proposal (basically a sectioned, 100-inch-wheelbase ’51 Kaiser) Dutch walked again, ostensibly for good.

Still, the great prewar coachbuilder was persistent as well as proud, the Henry J chassis conventional but sound. Dutch realized it “deserved something better than it had received,” and decided to make a sports car out of it “without the authorization and knowledge of the Kaiser organization, but spending my own money...I built [a] clay model during the first half of 1952...followed by a running prototype.”

Typically Darrin, it was a rakish two-seat convertible with several unusual features. Fiberglass body construction was novel enough, let alone a three-position folding top with functional landau irons and -- the real conversation piece -- sliding doors. The last, which Darrin had patented in 1946, rolled forward into long front fenders, reflecting his dislike for conventional doors. The styling was beautifully proportioned, and handsome except for a small, high shell-shaped grille that “looked like it wanted to give you a kiss,” as one wag put it.

Darrin showed his prototype to Henry J. Kaiser himself -- and was promptly chewed out. “What’s the idea of this?” Kaiser fumed. “We’re not in the business of building sports cars.” Dutch started to explain when Mrs. Kaiser leaped to his defense (as she had with the ’51 Kaiser’s “sweetheart” windshield). “Henry,” she purred, “This is the most beautiful thing I’ve ever seen...I don’t think there’ll be many companies after seeing this car that won’t go into the sports-car business.”

That was all HJK needed, and the Kaiser-Darrin was born. Henry named it, overruling DKF (for “Darrin-Kaiser-Frazer”), his department heads’ unanimous choice. He also ordered up a four-passenger model with backward-sliding rear doors, but it only got as far as a clay model. (Dutch later pitched it to ailing Studebaker-Packard, which was in no better shape to field it either.)

Practical considerations dictated several changes for the production Darrin, but only one aroused Dutch’s ire: reworked front fenders to put the headlamps at regulation height. Other alterations comprised separate lids for the trunk and top well (the prototype used a single rear-hinged cover), one-piece (instead of split) windshield sans “sweetheart dip,” a more professional interior with pleated vinyl upholstery (the prototype’s leather trim was made optional) and a revised dash with gauges clustered ahead of the wheel (instead of spread across the panel).

Seatbelts appeared for only the second time in U.S. production (Nash had dropped them in ’51 after “bad press”) and K-F switched to the F-head Willys version of the Henry J six, with single carburetor (instead of three) and 10 more horsepower. Glasspar, pioneer builder of fiberglass boat hulls and kit cars like the Woodill Wildfire, was contracted to supply Darrin bodies.

“The Sports Car The World Has Been Awaiting” bowed in prototype form in late 1952, but the production version (officially DKF-161) didn’t reach showrooms until early ’54. At a lofty $3668, it cost more than a Cadillac 62 or Lincoln Capri but was at least fully equipped: overdrive 3-speed manual transmission, tachometer, windwings, electric wipers, whitewall tires, and more. Performance wasn’t very exciting -- less than even Chevy’s mild-mannered new Corvette -- though a couple of supercharged examples (most production Darrins were “customized” in some way) were among 1954’s quickest sports cars.

But the next year, Kaiser-Willys (as the firm had become) bailed out of the U.S. market and the Darrin was finished. Dutch installed 304-bhp Cadillac V-8s in about 100 leftovers and sold them for $4350 apiece. If his cars were going to be changed, he’d be the one to change them. These were exciting. A few even won races.

Today they’re among more than 300 surviving Darrins, an unusually high percentage of the paltry 435 built. But then, the Darrin itself is unusual -- long the most prized of Henry J. Kaiser’s automobiles. Dutch was proud of that until the day he died.

To learn more about the Kaiser-Darrin and other sports cars, see: