John Najjar: Designer of the Ford Mustang I Concept Car 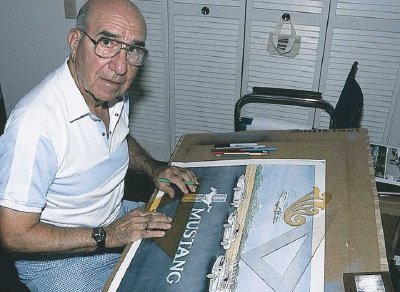 John Najjar rose to design fame after telling Henry Ford himself of his desire to draw cars. See pictures of Ford Mustangs.

Of the many cars and trucks shaped by John Najjar over his 43 years with Ford Motor Company, none is more famous than the experimental midengine Mustang I of 1961.

Najjar has also long been credited with coming up with the horsey name and contributing to the running-horse logo that survived to the production Mustang. His work on the production-car interior is less widely known.

Recruited by Ford out of high school in 1936, Najjar was a machinist trainee when Henry Ford himself happened by and asked if he was happy with the job. When Najjar said he'd rather be drawing cars, he was assigned to the fledgling design department to work with pioneer Ford stylist E.T. "Bob" Gregorie and Henry's son, Edsel Ford. Najjar rose to become Lincoln chief stylist in the mid-1950s and held a number of other high-level design jobs for Ford until he retired in 1979.

Here is Najjar's own recollection of his early days on the Mustang project:

By early '62, Gene Bordinat had replaced George Walker as Ford's design vice-president, and I was in Advanced Vehicles under Bob Maguire. Bordinat had given out a directive that each studio was to take a crack at a small, sporty car.

We had one clay model that somehow looked globby and bulky. A modeler who worked for me, Joe Siebold, was interested in midget cars, and I had been reading about engines in race cars being placed ahead of the rear axle. Then it hit me! A small midship-engine passenger car. I started talking to Joe, and he started to draw.

I remembered the power package from the little German Ford Cardinal from when I worked on that. "Why not take the front-engine drive and move it aft to drive the rear wheels?" So we did. Finally we showed our drawing to Maguire. He said, "That's pretty good, but keep it on the side 'til we see how it goes" -- meaning the executives' reactions to the other designs.

Bordinat brought Iacocca around to all the studios, but Iacocca didn't like any of the cars. Then came news that race driver Dan Gurney was coming in to see if we had anything. So in comes Gurney, and Maguire said, "Turn the blackboard around, John." This is after he'd looked at all the other models. And Gurney said, "Now there's a nice little car." So that's how the Mustang I started.

For the inside story on the debut of the Mustang I, go to the next page.

The Ford Mustang I

Najjar's concept for a small midengine sports car became the Mustang I.

Ford designer John Najjar had come up with a concept for a small midengine sports car in 1962. The design became the experimental Mustang 1 and inspired Ford to continue work that led to the production Mustang of 1964. Najjar's first-person account is a look inside at the Mustang 1's unveiling.

As it happened, the company needed a "bell ringer" for the fall press introduction of the 1962 products, and [Design chief Gene] Bordinat thought of our little car. He was out of money in that year's budget, but he got hold of Herb Misch, the vice-president for engineering. Misch comes in with Bordinat and some other people. "Can it be made?" they asked. "Yeah, we can do a fiberglass model." They said, "We'll need more than that." They wanted an operable vehicle to show the press.

Misch put Roy Lunn in charge of building it. Roy had been a racing-car designer, and he worked with us on engineering. He really brought our concept to life. Jim Sipple, from Damon Woods' studio, did the interior, and I did the exterior.

We finished a clay model and took fiberglass casts of it. Roy only had something like 60 days, and his staff worked feverishly designing the tube work for the frame, the front suspension, steering mechanism, all the operating parts. He elected to have the drawings and fiberglass panels shipped to Troutman-Barnes, a racing-car fabricator in California, which would build the car in metal. It was an exciting time.

The finished vehicle came back to the Design Center by late August or early September. It was driven on the Ford test track by a race driver named Dan Jones, who applauded its handling, but there was no other testing before it was shown to the press. Certain press people were allowed to ride in it, and it became the topic for the day, giving our 1962 program a much-needed lift.

A limited number of people were allowed to test the driveable prototype of the Mustang I.

Later on, a movie was made of the Mustang I, along with a 1/10 scale model. These were taken to different college campuses by company people who gave talks about Ford being the wave of the future, having youth in mind. Wherever possible, the drivable Mustang I was shown too. The Mustang I was a viable, marketable car, but Mr. Iacocca had a higher volume goal and wanted a 2+2 design. But it did kick off his dream of a sporty, youthful car that could be produced in huge volume.

Later on, a movie was made of the Mustang I, along with a 1/10 scale model. These were taken to different college campuses by company people who gave talks about Ford being the wave of the future, having youth in mind. Wherever possible, the drivable Mustang I was shown too. The Mustang I was a viable, marketable car, but Mr. Iacocca had a higher volume goal and wanted a 2+2 design. But it did kick off his dream of a sporty, youthful car that could be produced in huge volume.

After the Mustang I, I helped develop the interior for the production Mustang. One of my ideas was to save money by eliminating the door trim panel. At first we were going to use a cloth insert on steel, but I found a vendor that could supply textured metal that resembled vinyl. I had some samples made, and everyone said let's do it. I also got approval for making the rear seat curve up from the cushion into the backrest for an integrated look. It was that kind of thinking and attitude that made the whole car a pleasure to work on.

When the production Mustang was finalized, Bordinat wanted to show that it was a logical development from the Mustang I, so he took "cues" and various parts from the production car and worked them into another show car, the Mustang II. He had me do some sketches for it that went to Don DeLaRossa's team, which did the full-size design.

I would say it's absolutely true that Lee Iacocca is the "father" of the Mustang. He was the one who assigned the people and assigned money to build the early clay vehicles and get the project through. I understand that Mr. Ford was not all for it, but Iacocca was able to convince him to go ahead. I'm sure he had even had the car researched with the dealers.