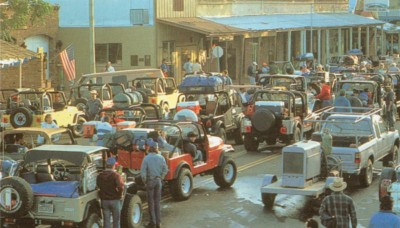 The original Rubicon trek was in 1952. Mark Smith, Ken Collins, and a group of their friends -- most of them members of the Georgetown Divide Rotary Club -- organized it to bring outside dollars into the region's depressed economy. The route was based on a path blazed by Native Americans and later used by stagecoaches.

A test run by four Jeep Universals and 12 men was followed in August 1953 by the first Jeepers Jamboree. It attracted 150 participants in 55 jeeps. They skirted the shores of picture-postcard Lake Chiquita, scraped their way down the "Big Sluice," camped overnight at lush Rubicon Springs, then bounced on to magnificent Lake Tahoe.

Even from the beginning, men and women of all ages took part. There was Dan Bassi, who had been a stage driver along the Rubicon Trail back in 1904, and Beatrice Luce, of Georgetown, who admitted to being "past seventy." Some of the machines were old-timers, too. Several Jeeps were of World War II vintage, and one was a Model MA -- one of the original 1940 Willys pilot vehicles. That MA is today the centerpiece of the Jeepers Jamboree Museum in Georgetown.

The annual four-day Rubicon trip was an instant success. By 1974, organizers were forced to set a limit of 400 vehicles and 1,500 people. Demand sparked a second Rubicon trip (for up to 200 vehicles), and the two events are now held each year in July and August. Participants come from all over the world.

The Rubicon Trail itself crosses private land held by 20 separate property owners. Rubicon Springs in fact has been purchased by Smith and some of his associates to be maintained in its natural state. The route is open to any 4WD vehicle-weather permitting-and the Jeep Division of Chrysler makes regular use of it as a testing ground. The original Jeepers Jamboree is now an independent corporation with exclusive rights to the "Jeepers Jamboree" name. It opens its runs to Jeeps and to the older, smaller Toyota Land Cruisers and British Land Rovers that were Jeep's only contemporaries in the early days of the Rubicon.