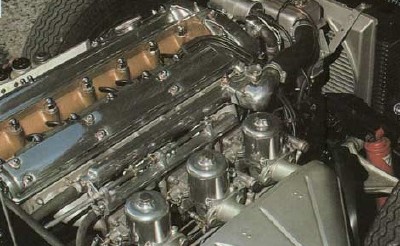 One writer called the Jaguar XKE engine "one of the most amazing achievements of modern times."

Acceleration, Bolster enthused, was "almost incredible ... In the past, only racing and the larger sports/racing cars have been capable of breaking 15 seconds for the standing quarter-mile. The S Type actually clocked 15.1 secs. on a wet road and 14.8 on an almost dry one...."

His 0-60 time was 6.8 seconds. For top speed he recorded 148.1 mph, although "a strong side wind was blowing at the time, and I am happy to call this a genuine 150 m.p.h. car." A velocity of 145, he continued, "came up from time to time during ordinary road motoring." He did explain that to see these speeds with the standard 3.31 axle ratio, one had to venture beyond the 5,500-rpm redline, which Jaguar had told him was "permissible" in top gear. "I found that 5,800 r.p.m. was very quickly gained, the last 200 r.p.m. taking rather longer to come up."

Powerful disc brakes and steady, responsive handling made such speeds seem reasonable. "The wet road behaviour is indeed excellent, a slight initial understeer being quickly converted to a balanced condition or a tail slide, depending on the position of the accelerator pedal. On dry roads, the most outstanding feature is the machine's behaviour on fast, open bends. Quite appreciable curves may be rounded at 110 m.p.h., and full throttle may be held without any tendency to 'lose it."'

Bolster also made the significant point that Jaguar's painstaking development of a rear subframe mounted on rubber bushings had eliminated one of the chief arguments against independent rear suspension: noise intrusion into the cockpit. The XKE, he said, was quieter in terms of gear whine and road rumble than most conventionally suspended cars.

For his part, Autosport editor Gregor Grant had this congratulatory capsule for Coventry: "It is a true conception of a modern sports car, displaying features which could only have resulted from intensive development work and a racing history...."

Similar sentiments filled public prints all over the world. Seldom has any new car received the voluminous coverage lavished on the XKE during 1961. Not only was it sexy and sensational, ranking right up there with recognized supercars, it was attainable.

At $5,595 in the U.S., it was less than half the cost of a contemporary Ferrari. As with the XK 120, many thousands of people would be able to buy the XKE. And that made it important.

Five days after British readers had devoured Autosport's test, The Motor's came out. It told a tale of 3,000 miles in England and on the Continent with an open two seater.

The staff had anticipated that the XKE would be "something of a landmark in sports-car progress" but they were resoundingly convinced after their week's hard motoring: "Curiously enough, its very close connection in design and appearance with competition Jaguars gives people the impression that this is essentially a racing car with all the limitations for ordinary use that this implies.

"Nothing could be farther from the truth; admittedly, it is quite easily the fastest car ever tested by The Motor, but the roadholding is entirely capable of handling the power, the springing is more comfortable than that of many sober touring cars and the engine is extremely flexible and devoid of temperament.

"The ease and delicacy of control is such that 220 b.h.p./ton was no embarrassment at all on the packed snow and ice of Swiss mountain passes using ordinary racing tyres."

"Ordinary racing tyres"? Well, the manufacturer did list Dunlop R5s as an optional extra. With these better boots, plus a weight advantage of about 100 pounds over the coupe, Motor's roadster motored to 60 in a breezy 7.1 seconds and through the standing quarter in 15.0 (a retest on normal Dunlop Road Speeds dropped that to 14.7).

Maximum speed was 149.1 mph with the soft top up. Here, too, the engine was taken 500 rpm into the red zone. The cost of all this speed was a "touring fuel consumption" of just under 18 miles per U.S. gallon.