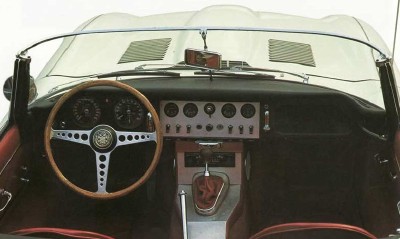 Driving the Jaguar XKE put you behind a classic sports car steering wheel and had you looking ahead over a long, shapely hood.

A push of the starter button and the Jaguar XKE awakes with a spine-tingling growl, that classic Jaguar sound. At once suave and savage, it conjures the image of Tarzan in a tuxedo.

With effortless ease, the long-stroke engine seems to pick the car up and move it down the road in an oily-smooth feline lope. As your foot goes down harder, the growl changes to a predatory snarl. It is a true warning.

Although there is plenty of muscle at lower revs, at about 3,500 rpm the 3.8 engine takes a deep breath, the exhaust note becomes a wild howl, and the beast seems to leap for the redline. No red-blooded enthusiast can possibly have a soul so dead as to not feel exhilarated by the XK six.

Even magazine writers had trouble maintaining professional objectivity. One of the first to fail was John Bolster, whose factory-press-fleet XKE, a Fixed Head Coupe, was delivered with the promising British registration plate 9600 HP.

His report ran in the issue of Autosport appearing in England on Friday, March 17,1961, two days after the XKE was first revealed and just as it was making its debut in Switzerland.

"If Les Vingt-Quatre Heures du Mans has been responsible for the new 'E' Type Jaguar," wrote Bolster, "then that Homeric contest on the Sarthe circuit has been abundantly justified." Bolster had always written favorably of Jaguars, but he strained for superlatives in writing of this one.

"Here we have one of the quietest and most flexible cars on the market," the writer rhapsodized, "capable of whispering along in top gear at 10 m.p.h. or leaping into its 150 m.p.h. stride on the brief depression of a pedal.

"A practical touring car, this, with its wide doors and capacious luggage space, yet it has a sheer beauty of line which easily beats the Italians at their own particular game ... All this, and 20 m.p.g. [17 U.S.] economy too, comes at a price which is about half that of the current crop of glamour-wagons.

"It is all the more remarkable that this Grand Touring car par excellence is directly descended from the Le Mans-winning 'D' Type. The Jaguar engine is one of the most amazing achievements of modern times...." Some people are hard to please.

But "wide doors"? Well, Bolster would probably have crawled in through a keyhole to drive this car. "To give some idea of the potential performance," he explained, "let us try to imagine an even lighter [Jaguar] XK 150S with a greatly improved aerodynamic penetration. Let us then envisage the virtual elimination of wheelspin by virtue of the I.R.S. The result, of course, is something out of this world...."

By "I.R.S.," Bolster meant the XKE's new independent rear suspension, which he counted a tremendous value. One performance limitation of both the D-Type racer and the hotter-engine XK sports cars had been their "live" beam-type rear axle.

"Live" referred to the method by which it was mounted, but drivers of higher-performance Jaguars would have been forgiven for thinking it was called "live" for the way it bounded about on bumps or tramped violently when too much power set a wheel spinning.

All that was history in the XKE. Observed Bolster: "Autosport has always championed the independent suspension of the rear wheels, and we have often wondered what a Jaguar would be like with this desirable design feature. Now we know, and the answer is -- it's a winner!"