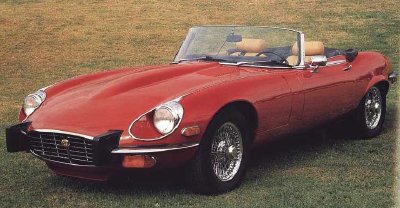 Its classic inline six enfeebled by emissions standards, Jaguar in 1971 turned seat convertible (shown) or a 2+2 coupe, both on the longer of two wheelbases that had been offered on the six-cylinder E-types.

History repeated itself with the Jaguar E-type Series 3 V-12. It was a smashing success once, in 1948, when Jaguar debuted its robust new engine in a sports car instead of the sedan for which it was designed. But the inline-six that met its public in the XK 120 was 23 years old by 1971, and enfeebled by emissions regulations. The E-type was 10 years old and needed new life. Why not put the new passenger-car V-12 in a revised version of the aging sports model? Thus, the E-type Series 3 V-12 was born.

Despite its sports-car heritage, Jaguar depended on sedans for its survival and had developed its twelve to power them with sufficient torque and refinement. It was beefy enough to handle up to 7.0 liters displacement, but an initial volume of 5.3 was chosen. The all-aluminum single-cam V-12 was about three inches longer than the inline-six, and though it outweighed the six by less than 75 lbs, it still tipped the scales at almost 700 lbs. Jaguar rated it at 272 hp in Europe and 314 in the United States, though a realistic American figure was 250 hp at 6000 rpm and 283 lb/ft of torque at 3500. Installed in the E-type, it created the Series 3.

The new engine fit in the same bay as the six, but for better leg room Jaguar shelved the convertible’s 96-inch wheelbase and gave all Series 3s the 105-inch span previously exclusive to the 2+2 coupes. A larger radiator inlet with formal grillework and subtle wheel arches to clear wider tires were other changes. Larger, softer in nature, with weight redistributed 53/47, the E-type had lost the wilds of its youth.

“Perhaps a little naively,” said Robert Bell in Motor, “all we expected to try was a new engine. What in fact we drove was a new car -- not a yowling, aggressive Ferrari-like machine, with which, perhaps, most people associate a V12 engine, but a very smooth, quiet and refined grand touring sports car.” Still, newer rivals had better ergonomics, were more reliable, and just felt more modern. “A magnificent engine in an outclassed body,” was how Road & Track saw the Series 3.

Jaguar had not duplicated its success of 1948, and it would be years before any of its sports models generated even a flicker of that excitement. Encounter a V-12 E-type, though, and see if you don’t study it long and hard.