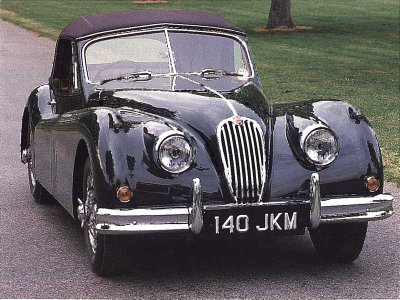 Given the success of the XK 120, Jaguar made only considered changes to its successor -- and took pains to retain the overall styling.

So advanced and successful was the XK 120 that Jaguar didn’t need to replace it for a full six years, with the XK 140. This allowed the factory to get heavily involved in motorsports, producing the LeMans-winning C-type in 1951 and the wind-cheating D-type three years later.

Predictably, the successor XK 140 was an improved variation of the XK 120. As before, the roadster came with traditional British side curtains, the coupe and convertible with proper rollup door glass. Jaguar moved the engine/gearbox assembly forward three inches, enlarged the cockpit, and raised the rooflines slightly. That created enough room to permit a pair of very small “+2” rear seats in the coupe and convertible. It also resulted in a forward weight shift, which along with adoption of rack-and-pinion steering, improved the handling. Engine cooling was better thanks to wider-spaced grille bars.

Standard horsepower increased by 30 to 190, same as the previous $800 “special equipment” package. An “M” package added wire wheels and fog lamps, while a new “C” option brought LeMans-proven C-type cylinder heads, which were painted red and gave the 3.4 -liter inline-six one horsepower for each of its 210 cubic inches.

Total XK 140 production was 8884; 38 percent were roadsters and the balance was split evenly between Fixed Head and Drop Head coupes.

On average, the 140s were about 200 lbs heavier than the 120s, and top speed didn’t really increase. But John Bolster, technical editor of Britain’s Autosport, said the 140 was “a great improvement in every important respect” over the 120. His MC coupe, heaviest of all 140s, took two gear changes and 10 seconds to reach 60 mph, but its real appeal was an ability to get to 100 mph quickly and cruise there “with only a whiff of throttle.” The 140, Bolster asserted, was “the most effortless car imaginable.”

These were sports-car fellows and this was sports-car nirvana. There were things Detroit still didn’t seem to understand.

“The quality of finish is immediately apparent on the outside,” R&T said of its Jaguar, “but a look under the hood shows attention to detail that is in marked contrast to that found under a domestic product.”