Prev NEXT
The Jaguar C-Type bodywork was entirely new. It was a simple low, rounded envelope designed to cheat the wind as well as that black art was then understood.

In fact, the shape was owed to a professional aircraft aerodynamicist, Malcolm Sayer, making the C-Type one of the few Jaguars that would not be styled by Bill Lyons. The reason, as Bill Heynes joked years later, was that the boss was away on a sales trip to North America during the critical weeks -- which also allowed the work to be done in record time.

This body was purposeful in other ways. A single right-side door bespoke the no-frills, pure-speed intent, and the entire nose section pivoted up on front-mounted hinges for easy engine access pitside.

A passenger seat was provided, but it was only a hard, token affair high atop a toolbox, and getting into it demanded a careful climb over the door-less -- and fragile -- aluminum body-side. There was no trunk (no need for it), but a trap door was set low down on the tail for spare-wheel access.

In contrast to the year before, the XK 3.4-liter inline six-cylinder engine was treated to a mild hop-up for its 1951 racing chores. Larger exhaust ports served larger exhaust valves, and the camshafts lifted all the valves by an extra 1/16 inch, 3/8 inch total.

New valve springs lifted the designed valve-bounce revs to 6,500, a healthy 1,000 rpm above the peak-power speed. New pistons with solid skirts increased compression ratio to 9.0:1, but the pair of SU carburetors were the regular production items with 13/4-inch bores.

Cold outside air was ducted to the carbs from the nose, rather like the system on the street XK 120 but without the air cleaner. The exhaust manifold remained a casting, but it had different dimensions to suit the higher working revolutions.

There were better crankshaft bearings, and a stronger crankshaft damper. Of course, the flywheel was lightened. The distributor was revamped, too. At 5,500 rpm, the race engine put out about 204 horsepower.

Learning from the Johnson/Hadley failure of 1950, Jaguar engineers installed a stronger clutch with a solid center. While at it, they switched to a different transmission shaft to make it easier to change ratios. The same consideration led them to exchange the road car's ENV rear axle for one made by Salisbury, which offered a greater variety of final-drive gearing.

What to call it? At one stage some thought apparently was given to "XK 150," after its projected top speed. In the end, despite its many departures from the road-going XK 120 (some of which would later be adopted for street use-more "racing improves the breed" from Jaguar), it was still referred to as an XK 120, although a "competition" version: XK 120C. That and chassis numbers beginning with the letters XKC made C-Type inevitable, and it stuck.

Race-ready, the Jaguar C-Type was much lighter than its Jaguar XK 120 street sister, coming to about 2,100 pounds. That was according to figures published by Jaguar engineer Robert Berry in the book Jaguar: Motor Racing and the Manufacturer. It represented a difference on the order of 30 percent.

Whereas the road car carried more than half its weight on the rear wheels, the racer was slightly nose-heavy at 51.5-percent front/48.5-percent rear.

Its body was only slightly smaller in frontal area compared to the XK 120 roadster equipped with aeroscreens, but sufficiently streamlined as to require 22 percent less horse-power to maintain a given speed. In several tests, the original C-Type topped out at nearly 144 mph. 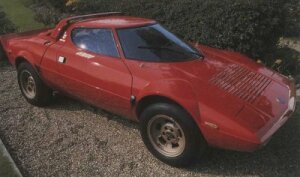