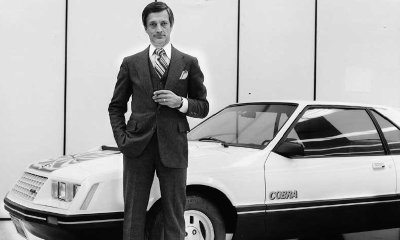 Jack Telnack had a lifelong association with Ford. His first big hit came with the sleek 1979 Mustang that so reflected his European experience. See more pictures of the 1979 Ford Mustang.

Designer John J. "Jack" Telnack was born to be a Ford man. Not only did he enter the world at Dearborn's Henry Ford Hospital, his father was a power-plant worker at Ford Motor Company's giant River Rouge factory complex. As a boy he met old Henry Ford himself when the legendary mogul visited a neighbor family. He also remembers many youthful hours spent gazing at the shiny new cars on display in the old Ford Rotunda -- and being shooed away from unauthorized visits to the company proving grounds.

Eventually, the love of cars led Jack to study automotive design at the Art Center School in Los Angeles. On graduation he was plucked by a Ford recruiter and joined the company in 1958, where he would remain for 39 years. Though various assignments would take him to all parts of the global Ford empire, Telnack spent plenty of time in Dearborn contributing to various Mustangs. In fact, he worked on the very first pony car as an enthusiastic twentysomething in Joe Oros' Ford Studio.

His first big U.S. design coup came with the sleek 1979 Mustang that so reflected his European experience. Partly on the basis of its sales success, he was promoted to head Ford's North American design operation, where he masterminded the successful "aero look" exemplified by the 1983 Thunderbird and 1986 Taurus. He then went on to craft Ford's "New Edge" theme. He retired from Ford in 1997. Here, in Telnack's own words, is the inside story on the creation of the 1979-1981 generation of Mustangs.

I was in and out of Mustang programs pretty much my whole career. I left for Australia in '66 and returned in 1969 to be in charge of the Mustang studio. We did the first soft bumpers front and rear, the urethane bumpers for '71, which was a breakthrough. I'm not sure anybody else was doing them then, but it was a pretty dramatic change for us.

I consider the '79 Mustang a breakthrough car. It was the first project I worked on when I returned from Europe [as design vice-president in 1973-76]. It was such a departure from anything we were doing here. It had the first slantback front end we had done in Ford U.S. That was big news because we had clear direction from our vice-president of design at that time, Gene Bordinat, saying, "thou shall never do a slantback front end. Henry Ford II only wants vertical front ends, and he'll show us the door if we ever try anything like it."

Telnack's confidence in his European design sensibility was obvious. Now he had to sell it to Henry Ford II himself. Find out on the next page how the designer went about doing just that.