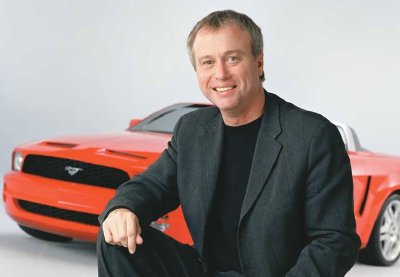 J Mays directed the styling of the Ford Mustang after a distinguished career in design.

Rare is the automotive stylist who breaks out of the studio and into the mainstream, but when you're the driving force behind such high-profile designs as the Volkswagen New Beetle, Audi TT, and the Ford GT and Thunderbird, notoriety finds you. It generates articles in Time and USA Today and scores of other publications, awards from such auspicious heights as the Harvard Design School, even a retrospective at the Los Angeles Museum of Contemporary Art. Such is the star power of Ford design chief J Mays. Born in Oklahoma in 1954, he graduated from California's Art Center College of Design and climbed the career ladder in the studios of VW, Audi, and BMW. Mays joined Ford Motor Company in 1997, and in 2003 was named the corporation's Group Vice President, Design, responsible for shaping the design direction of its entire portfolio of brands. That role expanded in 2005 to include the title of  "Chief Creative Officer." Mays directed the styling of the 2005 Mustang, an experience presented here, in his own words.

Well, you never want to have anyone say that you've loused up an icon. I've done quite a few icons now in the last 10 years, for this company and other ones. And my biggest nightmare, the thing that made me wake up at night in a cold sweat, was you don't want to be known as the guy that screwed up the Mustang. You'd like to be known as the guy who resurrected everything that was great about it and the fantastic things that we remember about it.

This is a bit of a cultural game we play. If you look at how this country operates, it operates on a bandwidth that runs from rural to suburban to what we're seeing as an emerging trend -- not just with hip-hop artists, but with the entire culture -- and that is urban.

Mays sees Mustang as more of a gritty, hardscrabble urban icon than other Ford vehicles.

Under urban, there are offshoots: urbane and metropolitan. We have, on the rural side, our F-150 trucks. Very successful. And that's how they're positioned culturally and in the mind of our customers. On the suburban end of the spectrum, we have clean, contemporary, modern designs like the Five Hundred and Freestyle [now the Taurus and Taurus X, respectively] that we think fit into the suburban lifestyle. And there's nothing wrong with that. That's the way the majority of us live. And these are contemporary, modern-designed vehicles that happen to fit into that.

Still, Mays sees the country as growing increasingly urban. On the next page he describes how Mustang was designed to fit in that world.