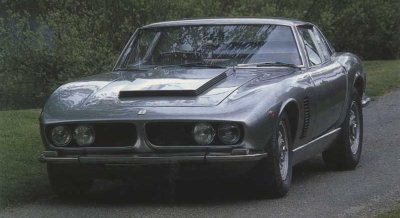 The discreet “7-Litre” badge and raised hood section identify this as a late- Sixties Grifo with Chevrolet 427 big-block power.

You may not see a connection between the tiny two-cylinder Isetta “bubblecars” of the Fifties and the mighty Iso Grifo of the Sixties, but it’s there. Renzo Rivolta, founder and head of Iso S.p.A. of Bresso, near Milan, was responsible for both.

Iso’s business was founded on refrigerators and, later, those strange little 236-cc Isettas. But Rivolta wanted a much more ambitious car, and in 1960 was attracted by the promise of the Chevrolet-powered British Gordon GT prototype. After borrowing it for inspection, he borrowed some of its ideas for a new high-performance 2 + 2 that would appear in 1962 as the Iso-Rivolta (Renzo was nothing if not immodest about names).

Giotto Bizzarrini, the noted freelance Italian engineer who’d been on the staff at Maranello and was largely responsible for developing Ferrari’s celebrated 250 GTO, was hired to design a new chassis around Corvette running gear. Bertone was contracted for body styling and production; the youthful Giorgio Giugiaro penned the shape.

The result was a tastefully restrained steel-body notchback coupe with all-independent suspension and a top speed of over 140 mph. Some were fitted with ZF 5-speed gearboxes, others with the Corvette’s Borg-Warner T-10 4-speed manual or GM 3-speed automatic. Though sales were as low as production, the Rivolta paved the way for an even more exciting Italo-American hybrid.

A year after the Rivolta debuted, Giugiaro and Bertone produced the stunning Grifo A3L prototype coupe. Though first shown at Turin in early 1963, it wouldn’t be production-ready for another two years, by which time several features had been toned down and the car made more civilized.

The body was still steel, but this time it was a big, curvy fastback with large engine-cooling grids in the front fenders, gaping twin-mouth grille, a l-o-n-g hood, and a tidy tail chopped Kamm-style. This was welded to a pressed-steel chassis, resulting in a very rigid structure.

The luxurious cockpit  of the Iso Grifo afforded a more comfortable driving posture than in most Italian supercars.

Predictably, the Grifo shared running gear and suspension with the Rivolta but was tuned for higher performance. The engine was Chevrolet’s 327-cubic-inch small-block V-8 as used in the contemporary Corvette, initially offered with a choice of 300 and 365 horsepower. Front suspension was via conventional wishbones and coil springs, while the rear employed a coil-sprung De Dion live axle located by radius arms and Watt linkage. Brakes were four-wheel discs, of course, steering recirculating-ball.

With a top speed of at least 160 mph in 365-bhp form, the Grifo was as fast as any Italian supercar and as lovely to behold. Yet bluebloods seemed to forget its “native” (Bizzarrini) design, preferring to sniff at the crude, low-cost Yankee mechanicals. A jingoistic attitude, that, for the small-block Chevy proved time and again to be just as powerful as any exotic Latin engine and a lot more durable.

As expected of Bizzarrini, the Grifo was solid, handled and stopped well, and generally behaved in a very safe, if extroverted, manner. The main problem was that the Iso marque had nowhere near the prestige and snob-appeal of Ferrari or Maserati (Lamborghini also had the same problem at first), so it wasn’t easy to attract orders from the well-heeled types at whom the car was aimed.

The Grifo chassis was also used for a four-door Iso sedan, the Fidia S4 of 1967, and the 2 + 2 Lele fastback, arriving two years later. But the Grifo was always the fastest, because of its low build (only 47 inches high) and good aerodynamics. By that point, buyers could order the big-block Chevrolet 427 V-8, which brought a central hood section raised not only to clear the engine but provide more effective cooling. So equipped, a Grifo could exceed 170 mph, truly mind-boggling for the time.

With the early Seventies came a facelifted Grifo, marked by a lower nose with semi-hidden headlamps -- and a decline in Iso’s fortunes. The 1973 Energy Crisis severely hurt sales of all Italian thoroughbreds, but Iso, always a marginal producer at best, suffered more than most. Production duly wound down in 1974 after 412 Grifos had been built, including a few late examples with Ford 351 “Cleveland” engines.

To learn more about Iso Grifo and other sports cars, see: