What type of induction system do turbocharged cars have? 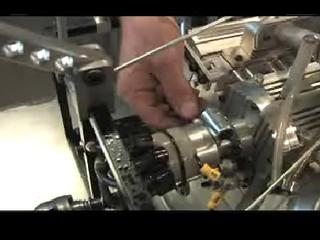 A turbocharger is a kind of forced induction system that compresses the air that flows into a car's engine. When the air is compressed, more air can fit into a cylinder, meaning more fuel can be added as well; about 50 percent more, in fact, since normal atmospheric pressure is 14.7 pounds per square inch (psi) and a turbocharger provides a boost of six to eight psi. With more oxygen and more fuel, every explosion from the spark plug gives the car more power than it would have without the turbocharger, which in turn improves the power-to-weight ratio of the engine.

The exhaust from the engine cylinders spins a turbine, which is connected to the compressor that pressurizes the air that goes into the pistons. The turbines spin faster when there is more exhaust going through them. The turbine in a turbocharger spins as fast as 150,000 rotations per minute (rpm), which is 30 times faster than a regular car engine.

Most turbochargers have a wastegate, a valve to allow exhaust to bypass the turbine blades if the pressure is too high. This way the turbine won't spin too quickly. This helps to prevent turbo lag, which is what happens when you have to wait a second after stepping on the gas until the turbine gets up to speed, and then the car lunges forward. Another way to decrease lag is to reduce the inertia of the parts that rotate by making them lighter. You can do this by having a smaller turbocharger (which of course would not be able to boost your engine speed as much as a large one), by using ceramic turbine blades (which are lighter tan steel ones) or by supporting the turbine shaft with ball bearings instead of fluid bearings. This last method allows for the use of a smaller, lighter shaft and allows the shaft to spin with less friction.