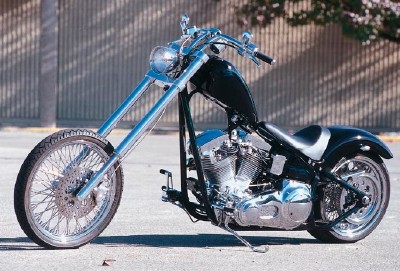 There are a number of factory-built choppers on the market today, and their accessibility and price prove attractive to many buyers. But not everyone is content to leave well enough alone. Take the factory-modified cycle owned by Independence Cycles for example.

One advantage of a factory-built chopper is the predetermined frame geometry and suspension setup; there's less worry that a chosen fork stretch and rake will handle poorly or won't work well with the desired frame. Factory models have usually been engineered to deliver optimum performance as they roll off the line.

That doesn't mean, however, that buyers must leave them that way. For many, factory-built choppers are just a blank canvas to be painted by their imagination.

Which is exactly how this creation came about. Independence Choppers offers a varied lineup, the Chopper model being the most radical. From there, the front fender was removed to add an Old School flavor, and the black paint was augmented with custom pinstriping. Then a set of Yaffe X-Pipes and other distinctive touches were added, all ensuring another just like it won't be seen around the next corner.

Go to the next page for more photos and details of this factory-modified chopper owned by Independence Choppers.