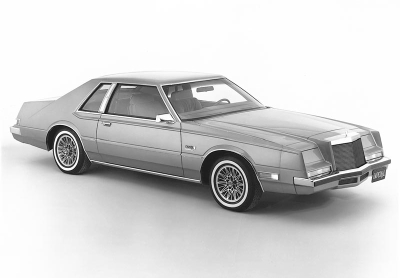 The Imperial returned in 1982 with a special Frank Sinatra edition, but even Ol' Blue-Eyes couldn't keep Imperial afloat.

By 1980, however, Chrysler thought it was time for another stab at a separate luxury line. Though facing imminent bankruptcy, and having staked their future on the sensible front-drive K-car compacts and planned derivatives, Chrysler executives led by president (and soon-to-be-chairman) Lee Iacocca felt a new flagship would assure the public that Chrysler had a future.

The result appeared for 1981 in a revived Imperial that amounted to little more than the world's most-expensive Dodge Aspen/Plymouth Volare. Actually, it was a reskinned version of Chrysler's second-generation 1980 Cordoba coupe, built on the same 112.7-inch-wheelbase "M-body" platform, complete with odd transverse-torsion-bar front suspension and an ordinary live rear axle on longitudinal leaf springs.

The company's veteran 318 V-8 was inevitable, but Imperial received a newly developed fuel-injected version as an exclusive, with mild 8.5:1 compression and a modest 140 bhp. It naturally teamed with the TorqueFlite automatic.

Styling was handsome. Up front was a square, Lincolnlike vertical-bar grille flanked by concealed headlamps inboard of knife-edge fenders. A distinctive "bustleback" rear end evoked razor-edge British custom coachwork from the early '50s -- and Cadillac's second-generation Seville, which had arrived the previous year with something very similar. Of course, there was no way Chrysler could have "stolen" the Cadillac's treatment, and the Imperial's bustle was arguably more attractive, but the sameness was still embarrassing.

Chrysler marketed the reborn Imperial as what it called a "one-price" car. Standard equipment was predictably lavish -- but then the base price was a steep $18,311. Still, you got clearcoat paint, choice of Mark Cross leather or rich velour upholstery, electronic digital instruments (a dubious feature), full power equipment, and various choices of tires and factory sound systems. The sole option was an electric sliding sunroof priced at a hefty $1044.

Production was assigned to Chrysler's Windsor, Ontario, plant, which took pains to ensure that quality would rank with the world's best. Among special measures taken were several post-assembly checks, plus a 5.5-mile road test and a final polish before shipment. Chrysler announced first-year production would be limited to "just" 25,000 units, also in the interest of high quality -- not to mention snob appeal.

Unfortunately, the new Imperial got lost in Highland Park's much-publicized financial crisis and an equal amount of bally­hoo surrounding the make-or-break K-cars. Promotional funds were limited. Frank Sinatra helped his friend Iacocca by singing "It's time for Imperial" in television commercials, but even Ol' Blue Eyes couldn't persuade buyers, and model-year production ended up at just 7225 cars.

The following year brought no changes save an "FS" package option -- special emblems outside, a set of tapes with Frankie's greatest hits inside -- and a base price hiked to nearly $21,000. Though the Imperial still cost thousands less than the rival Cadillac Eldorado and Lincoln Mark VI, sales remained tough, so despite heavy dealer discounts, production sank to just 2329.

The '83s were also little changed -- the Sinatra option was dropped, price lowered to $18,688 -- and fared even worse: just 1427. Having now turned the financial corner, but in no need of money-losers, Chrysler put Imperial out to pasture a second time.

Imperial came back, in a way, as the 1990-93 Chrysler Imperial. This was a luxury version of the Chrysler New Yorker sedan. The name died a third time when the LH platform sedans of '93 didn't include an Imperial.

The Imperial was 17 inches longer and six inches taller than the Chrysler 300 on which it was based. The four-place interior featured leather, suede, and wood veneers, while freestanding headlamps recalled Imperials of the early '60s. Despite its roller coaster career, the Imperial name still has meaning to both Chrysler and the public. With luck, Imperial will once again be Chrysler's flagship.