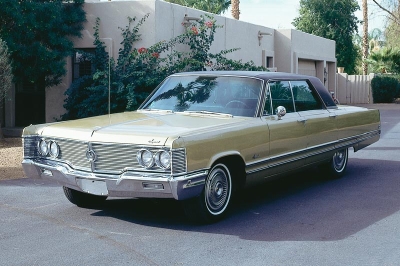 The 1968 Crown Imperial convertible would disappear after this model year.

The '67 Imperials were all-new. Chrysler engineers were by now sufficiently experienced with unit construction to use it for their most-expensive product, and newer technology allowed computerized stress testing of a given shape before it was ever built. Unibody construction also promised weight savings. And indeed, the '67s were about 100 pounds lighter than comparable '66s.

But the real reason for this switch was lackluster sales that had made a completely separate Imperial platform just too costly to sustain. Thus, as it had been before 1960, Imperial again shared basic architecture with Chrysler in the interest of reduced production costs.

Still, this was not readily apparent from 1967 styling. Up front was a high grille with a prominent nameplate, flanked by squarish Lincolnesque fenders containing the parking lights. The rear bumper was a broad U below a full-width taillamp panel with a large Imperial eagle medallion in a central circle. Sides were still flat, but relieved a little by full-length moldings above the rocker panels. Wheelbase contracted to 127 inches, though that was still three inches longer than Chrysler's.

A four-door pillared sedan returned without a series name at $5374, the most-affordable '67 Imperial. Other models soldiered on. Sales moved up to near 18,000, but Imperial was still far adrift of Lincoln, let alone Cadillac.

Volume dropped below 15,400 the following year and prompted a far-reaching decision: From 1969, Imperial would share most Chrysler sheetmetal as well as structure. One casualty of this move was the Crown convertible, which made its last appearance as a '68.

Style changes from '67 were slight: A new grille wrapped around the fenders to enclose parking and cornering lights; side marker lights front and rear, newly required by Washington; narrow paint stripes along the beltline; dual lower-bodyside moldings. Newly optional dual exhausts and twin-snorkel air cleaner coaxed 360 bhp from the 440 V-8, but only for this one year.

The Chrysler-like 1969-70 models were among the tidiest Imperials ever, with rounded, low-roof "fuselage styling" announced by a full-width eggcrate face with newly concealed headlamps (behind flip-up doors matched to grille texture). Ventless side glass was featured on air-conditioned coupes. Overall length stretched by five inches with no change in wheelbase, yet curb weights ran about 100 pounds less.

Model choices were pared to a hardtop coupe and sedan in Crown and LeBaron trim, plus a pillared Crown sedan priced identically to the Crown hardtop. LeBaron was no longer the $7000 semicustom it had once been, its list price being slashed by about $800 to the $5900-$6100 level. Despite fewer models, LeBaron bested the Crown in sales for the first time. The overall '69 total exceeded 22,000 units, the third-best showing in Imperial history.

However, the return to a close resemblance with Chrysler and increasing buyer preference for more-manageable cars contributed to a sales decline that would end Imperial's life as a separate make. As if to forecast the bitter days ahead, 1970-model production dropped by almost half from '69, to about 11,800 units.

Imperial retained its basic '69 design through 1973. Styling modifications were confined to easy-change items like grilles, taillamps, and minor trim, plus modest sheetmetal alterations at each end and year-to-year price/equipment shuffles. Offerings slimmed to just the pair of LeBarons after 1971.

Not surprisingly, Imperial suffered more than its rivals from the effects of the first energy crisis. The brand-new 1974 models had crisper lines and bold upright grillework, plus a three-inch shorter wheelbase and about 100 pounds less weight. But these modest reductions had less to do with the fuel shortage -- which Chrysler hadn't dreamed of -- than the need to realize further economies of scale through even closer sharing with that year's redesigned New Yorker.

Still, these Imperials were good-looking in their way, and distinctly different from the Chryslers. But with prices rapidly moving upward -- now $7700-$7800 -- they were none too successful. At just over 14,000, model-year volume for '74 was the lowest since '71; the following year it sank to fewer than 10,000 cars.

Seeking to cut losses, Chrysler decided it was time to forget Imperial, and the last '75 Imperial left the Jefferson Avenue plant in Detroit on June 12, 1975: a LeBaron hardtop sedan bearing serial number YM43-T5C-182947. But only the nameplate vanished immediately; the basic '75 package continued through model-year 1978 as the Chrysler New Yorker Brougham.