The Crown Imperial and Custom Imperial 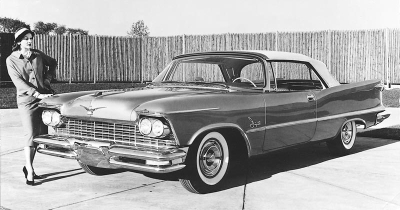 Imperial was all-new for 1957, bearing second-generation "Forward Look" styling from design chief Exner, marked by huge tailfins (with vestigial gunsights in the trailing edges), airier rooflines with curved side glass (an industry first), a finely checked full-width grille, and, where law allowed, quad headlamps in lieu of conventional dual units (where law didn't allow). The last was not a first, however, as that year's Chrysler, DeSoto, Nash, Lincoln, and Cadillac Eldorado Brougham also offered "quadrilights."

Seeking higher sales, Imperial expanded from one series to three, adding more elaborately trimmed Crown and LeBaron versions of the standard pillared sedan and Southampton hardtops. The Crown also offered the line's only convertible -- the first soft-top Imperial since 1951.

Arriving in January was a pair of LeBaron models, recalling the famed prewar coachworks closely associated with Chrysler -- a pillared sedan and four-door Southampton. Both new series were priced considerably higher than the standard Imperials: $5400-$5600 for Crown, and $5743 for either LeBaron.

Standard for '57 Imperials was Chrysler's superb new three-speed TorqueFlite automatic transmission, plus a Hemi enlarged to 392 cid for 325 bhp with 9.25:1 compression. Also shared with other '57 Highland Park cars was torsion-bar front suspension (called "Torsion-Aire Ride"). It made for fine roadability, the best in the luxury field. With all this, Imperial showed surprising sales strength. Volume more than tripled from '56, reaching near 35,000 units. That was still far behind Cadillac's 122,000.

Though the Crown Imperial sedan vanished for '57, the limo returned at a breathtaking $15,075 -- which largely stemmed from the fact that the car was now built by Ghia in Turin, Italy. With such low sales, Chrysler could no longer justify the time and space necessary to build such cars itself, especially with projected tooling costs of some $3.3 million.

Each Ghia Crown limo began as an unfinished two-door hardtop body mounted on the more-rigid convertible chassis and shipped with all body panels intact. Ghia cut the car apart, added 20.5 inches to the wheelbase, reworked the structure above the beltline, fitted and trimmed the luxurious interior, and finished off the exterior with 150 pounds of lead filler.

Each car took a month to complete, and initial delays made the Crown Imperial a very late '57 introduction. Sales were not impressive: only 132 Ghia Crowns would be built by the time production was ended in 1965, but all were impeccably tailored. Exactly 36 were built to '57 specifications, followed by 31 of the '58s and only 7 for '59.

A predictably minor facelift was ordained for '58. The main differences were circular parking lights, standard quad headlamps (by now legal everywhere), and a simpler grille. Prices were marginally higher across an unchanged lineup, and the 392 was tweaked to 345 brake horsepower. Reflecting Exner's fondness for "Classic" styling themes was an optional round decklid hump suggesting a spare tire, a 1957 option that continued to find favor in '58.

But this proved a poor year for the industry in general and Chrysler in particular, so only about 16,000 Imperials were built for the model year. To the frustration of dealers, people still thought of these cars as "Chrysler Imperials" -- and a Chrysler, though prestigious, didn't have the charisma of a Cadillac.

In time for the 1959 model run, Imperial production left Chrysler's Jefferson Avenue plant for its own assembly plant in Dearborn. Imperial could brag that it was not only a distinct make, but had its own facilities where it could take time for handcrafting and strict quality control. The '59s received a more extensive facelift of the basic '57 styling, highlighted -- for some, anyway -- by a toothy grille and broad brushed­finish appliqués on the lower rear flanks.

Standard models finally got a name -- Custom -- but the lineup was otherwise again unchanged. As at other Highland Park divisions, Imperial switched from Hemi to wedgehead V-8s: a new 350-bhp 413-cid unit shared with '59 Chrysler New Yorkers. It provided comparable performance, but was more economical to build and maintain than the fabled Hemi. Production inched up to about 17,000. Imperial would outsell Lincoln in 1959 and '60, but would never do so again.

After 1960, Imperial was strictly an also-ran among the Big Three luxury makes. As ever, Cadillac was the overwhelming sales leader, Lincoln a distant second, Imperial an even more distant third.