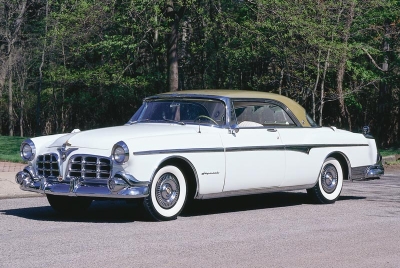 The 1955 Imperial Newport is considered one of Imperial's most attractive cars.

Imperial became a distinct make for 1955 and continued as such for the next 20 years. The name, of course, had been familiar since the late '20s on the most-luxurious Chryslers -- and that was a problem.

Somehow, Imperial could never shake its image as a Chrysler, and it was this, more than any other factor, that hampered sales in the prestige-conscious luxury field.

Nevertheless, some of Imperial's best years as a separate make were its first. The beautiful 1955 models, based extensively on Virgil Exner's period Parade Phaeton show cars, are still regarded as the most-desirable Imperials of all.

Elegantly trimmed inside and out, this big 130-inch-wheelbase sedan and Newport hardtop coupe wore a distinctive split grille, unique "gunsight" taillights, modestly wrapped windshield, and circular rear-wheel openings, making them among the best-looking of Chrysler Corporation's all-new '55 fleet. Chrome was abundant but tastefully applied; two-toning was limited to the roof.

Naturally, the '55s inherited the brilliant 331-cubic-inch Chrysler hemi-head V-8 used since 1951, now with 250 brake horsepower and mated to the firm's new fully automatic two-speed PowerFlite transmission. At nearly 11,500 units for the model year, volume was about double that of the 1954 Chrysler Imperial, an auspicious beginning. Still, Cadillac's '55 output was 10 times as great, Lincoln's five times as high.

Wheelbase was stretched three inches for 1956. (It would shrink back to 129 inches for '57.) The Newport was renamed Southampton and joined by a pillarless four-door. Still topped by "gunsights," rear fenders were raised into fins, but no other Chrysler product that year wore them more attractively. Frontal styling was unchanged.

Following Chrysler, the Hemi was bored to 354 cid for a gain of 30 bhp (helped by higher 9:1 compression), and the Power­Flite switched from a dashboard lever to pushbutton control, which would be featured on Chrysler automatics through 1963.

Though not in the same league as a Chrysler 300, the 1955-56 Imperials were lively performers yet surprisingly thrifty, winning luxury-class laurels in the Mobilgas Economy Runs. They were also impeccably built -- really the last Imperials that could make that claim. The one major option in these years was air conditioning, priced at $567. List prices ranged from the mid-$4000s to just over $5000.

Also available in 1955-56 were long-wheelbase Crown Imperial sedans and limousines. Built in Detroit, these took over for the long, eight-seat Dodge, DeSoto, and Chrysler sedans offered through '54.