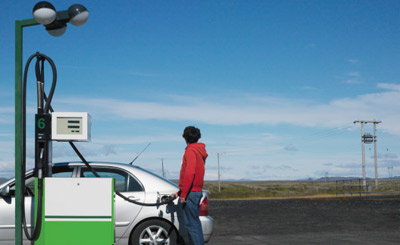 Houston, we have a problem. America's need for oil can't be satisfied by the supply coming out of Texas (or Oklahoma, or Alaska). And with nations like China and India undergoing rapid development, the world's supply of oil is increasingly strained. The need for more oil means higher prices and more pollution. You've probably felt the pinch at the pump already.

So what's the solution? In order to combat rising gas prices and decrease pollution, a number of new technologies have been developed. Fuel cell vehicles run on hydrogen and emit only water vapor. Biofuel vehicles run on fuel made from plant materials. Electric vehicles can run on rechargeable batteries, and hybrid vehicles use a combination of a gasoline engine and an alternative power plant.

You're probably familiar with gas/electric hybrids like the Toyota Prius. Though gas/electric hybrids are popular and offer a good way to increase fuel economy and cut back on pollution, they're not perfect (we'll talk about their shortcomings on the next page). Another hybrid option has been put forth and tested by a number of businesses, as well as the Environmental Protection Agency (EPA): hydraulic hybrids. Hydraulic hybrids use many of the same principles as electric hybrids, but instead of using potentially pollutive (and heavy) batteries, they use lightweight components and clean fluid to power the vehicle while it's at slow speeds.

Sound too good to the true? Read on to learn exactly how hydraulic hybrids work, how they compare to electric hybrids and how they're being used today.

Diesel: The Other Alternative Fuel

When we think of alternative fuel, we think of fuel that doesn't come from oil. However, a number of car makers are looking to diesel fuel as a viable alternative to gasoline. Though diesel is made from oil, it's less refined than gasoline and has more energy per gallon, leading to very good gas mileage. The problem? Since it's less refined, its emissions are dirtier than gasoline emissions. Still, a number of manufacturers (like Mercedes Benz) have built clean-burning diesel engines. 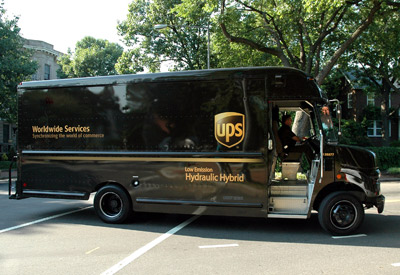 Gas/electric hybrid cars have become common, with many automakers offering hybrid models or versions of their models with hybrid drivetrains. Gas/electric hybrids use both gasoline engines and electric motors powered by lithium ion batteries to move the car. The batteries get charged though a process called regenerative braking. When a car brakes, two pads squeeze the wheel, which causes friction, slowing the wheels and stopping the car. But that friction is also energy -- energy that's lost when a conventional car brakes.

When a gas/electric hybrid brakes, that friction is captured and used to charge the battery. The battery then powers the electric motor. But the electric motor in most cars isn't very powerful and only moves the car at slow speeds. In most hybrid models, once the car hits 20 to 30 mph, the gas engine takes over and the car operates like any other.

Using an electric motor at slow speeds means gas/electric hybrids cut down on the amount of fuel they use and the emissions they release into the air. However, they aren't the only hybrid solution to the world's energy problems -- hydraulic hybrids can help too.

Hydraulic hybrids use three main components to power a vehicle at slow speeds and to augment the gasoline engine. Fluid is stored in a low-pressure reservoir. A pump moves the fluid from the reservoir to a high-pressure accumulator. The accumulator holds not only the fluid brought over by the pump, but also pressurized nitrogen gas.

These three components work together, but to get things started, they need energy. Like gas/electric hybrids, that energy is gathered through regenerative braking. Kinetic energy from the brakes powers the pump. As the vehicle slows, the pump is activated, and moves fluid from the reservoir to the accumulator. As pressure in the accumulator builds, it acts like a fully charged battery in a gas/electric hybrid, ready to power the electric motor.

But here's where hydraulic hybrids differ even more from gas/electric hybrids: Instead of sending power to the electric motor, which then sends it to the driveshaft (the part of the car which sets the wheels in motion), the accumulator sends its energy (in the form of nitrogen gas) directly to the driveshaft. As that happens, the vehicle accelerates, and the pump moves the fluid back to the reservoir, ready to charge the accumulator again.

The process is very simple and efficient. You know what happens when you shake a bottle of soda: Pressure builds until the energy is released. It's the same thing with a hydraulic hybrid, except instead of releasing the energy by spraying soda everywhere, it channels the energy to the drivetrain (the parts that connect the transmission with the driving axels), making the car go. Bypassing an electric motor helps it stay efficient, too.

Are there different setups for hydraulic hybrids? Read on to find out.

Are gas/electric hybrids all they're cracked up to be?

There's no question that gas/electric hybrids can use less fuel and pollute less than conventional cars, but they aren't necessarily the silver bullet. For one, their hybrid components (extra batteries and electric motor) add a lot of weight to the car, decreasing efficiency. Their batteries (like all batteries) contain toxic parts that are difficult to dispose of.

Many communities have also been too enthusiastic when embracing hybrids, opening up High Occupancy Vehicle (HOV) lanes to single hybrid drivers. When the hybrids zip through those lanes, they aren't using their electric motors and are emitting just as much pollution as a regular car. You could even argue that the pollution is worse since regular cars in HOV lanes are carpooling -- removing cars from the road -- while hybrid drivers are allowed to use the lanes by themselves.

While all hydraulic hybrids use reservoirs, accumulators and pumps, there are two ways those components can be coupled with a vehicle. The first, a parallel hydraulic hybrid, simply connects the hybrid components to a conventional transmission and driveshaft. (To learn more about transmissions and driveshafts, read How Automatic Transmissions Work and How Manual Transmissions Work). While this allows the system to assist the gasoline engine in acceleration (when the gasoline engine is working its hardest), it doesn't allow the gasoline engine to shut off when the vehicle isn't in motion. That means the vehicle is always burning gas (unlike gas/electric hybrids, which have engines that shut off at slow speeds or during a stop).

Still, the parallel hydraulic system does have significant benefits, including a 40 percent increase in fuel economy [source: EPA]. Though not in widespread use yet, parallel hybrid systems could be added to regular vehicles. As it is now, however, most parallel hydraulic vehicles are built with the system in place and are used in heavy-duty delivery vehicles, not passenger cars.

Series hydraulic hybrid systems use the same process as parallel, but don't use a conventional transmission or driveshaft and transmit power almost directly to the wheels. As we discussed before, reducing the number of components energy has to pass through before hitting its target makes it more efficient. Because the hydraulic system itself is turning the wheels, not a regular transmission or driveshaft, the vehicle's gasoline engine can be shut off, resulting in even more fuel savings. With the added efficiency and the ability to shut off the gasoline engine, series hydraulic hybrids are estimated to improve fuel economy by 60 to 70 percent, and lessen emissions by as much [source: NextEnergy].

You may wonder why the EPA partnered with UPS and built a delivery van, instead of partnering with a carmaker to create a passenger car. But once you learn about the best uses of hydraulic hybrid, you'll see why the partnership makes sense. Keep reading to learn the best ways to maximize the fuel-saving potential of hydraulic hybrids.­ 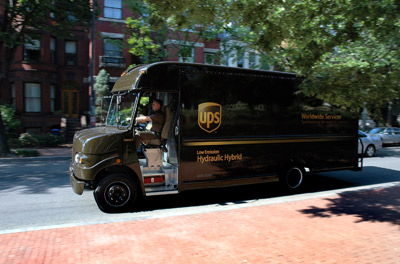 Because UPS trucks encounter a lot of stop and go traffic, they're the perfect vehicle for hydraulic hybrid systems.
Image courtesy of UPS

With the 2005 release of series hydraulic hybrid UPS vehicles, the EPA signaled its willingness to back the technology. But why tie it to such a big, heavy vehicle? Why not put the system in a lightweight car that gets good mileage?

UPS trucks go from one stop to the next, often in urban traffic, and are rarely used on the highway. They're also often left on as drivers make pickups and deliveries. In conventional UPS trucks, this creates pollution and adds to the company's fuel costs. However, in the series hydraulic hybrid trucks, the engine can shut off while the truck is on.

What is the payoff exactly? The increases in fuel economy equal huge savings, financially and environmentally. Because the energy in a hydraulic hybrid doesn't pass through an electric motor, it recovers more energy lost during braking. A gas/electric hybrid recovers 30 percent of braking energy, while a hydraulic hybrid can recover 70 percent, contributing to better efficiency [source: NextEnergy]. The EPA estimates that CO2 emissions from hydraulic hybrid UPS trucks are 40 percent lower than conventional UPS trucks, and a fleet of trucks could save 1,000 gallons of fuel a year. The EPA also estimates that with less maintenance than a gas/electric hybrid and less fuel then a conventional truck, UPS could save up to $50,000 over the lifespan of each hydraulic hybrid truck [source: EPA].

Another payoff is the efficiency of the hydraulic components themselves. Because the components are lightweight and use simple mechanics, they're easy to build, maintain and repair. In contrast, gas/electric hybrids use heavy batteries that may become obsolete and, as we've learned, are sometimes toxic and difficult to dispose of.

However, you won't see hydraulic hybrids in your local car showroom any time soon. No major automaker has plans to build hydraulic hybrid passenger cars. There's a surprising reason for that: your car radio. Modern cars have a number of electrical systems to power things like the radio or air conditioner. Those systems are powered by a conventional car's battery which gets charged by the car's gasoline engine. If the engine shuts off and the electronics stay on, the battery gets drained. That's why your car dies after you leave your headlights on.

In gas/electric hybrids, the extra batteries can keep the electrical components running while the engine is shut off at a stop. Hydraulic hybrids, however, lack the extra batteries needed to power electrical systems when the engine turns off. While that's not a big deal for parallel hydraulic hybrids, since their engines don't shut off when the vehicle stops, it is a big deal for series hydraulic hybrids. While they offer the best fuel efficiency, they can't power a radio or air conditioner when the vehicle stops, making them a tough sell for most American consumers.