Are some hybrids just greenwashed? 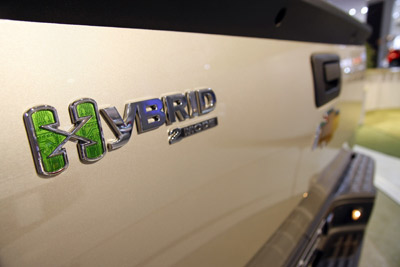 Some large hybrids, like this truck, might get better mileage than their conventional counterparts, but they aren't more efficient than small traditional cars.
Bryan Mitchell/Getty Images

By now, a lot of people are beginning to understand how our cars negatively impact the environment. That's why more and more people are turning to hybrids. In the U.S. market today, a hybrid refers to a gas-electric hybrid. These cars use a gasoline engine but also have a small electric motor. The electric motor allows the gas engine to switch off when the car is traveling at slow speeds or is stopped, saving a lot of gas and cutting emissions.

That's what most people think of when they think of a hybrid. However, automakers can use the electric motors in different ways -- like to help aid performance. Also, the electric components of a gas-electric hybrid (the motor, extra batteries) can add a couple of hundred pounds to the car's weight. That means that the gas engine, if it isn't tuned properly, can actually be made less efficient in a hybrid because it has extra weight to haul around. One example of a hybrid that falls into this category is the Lexus LS600h, which uses a V8 engine and has been tuned for performance and luxury, not for the environment.

Other types of hybrids may be greenwashed simply because they don't make a lot of sense as a hybrid. Hybrid trucks and SUVs offer some fuel and emissions savings over their conventional counterparts, but their gas mileage still isn't great. However, because the SUV has a hybrid badge, people may be encouraged to buy it rather than trading down to smaller, more fuel-efficient cars. This type of greenwashing is called "the lesser of two evils." Performance and SUV/truck hybrids are marginally better for the environment than their conventional counterparts but aren't all that green themselves. The unfortunate consequence of this type of greenwashing is that it often masks the best solution: simply driving less.

Then there's the dirty secret of every single hybrid on the road: their batteries. While the ability to run on batteries is what makes hybrids green in the first place, some hybrid batteries are toxic, difficult to dispose of and bad for the environment. This is an example of "hidden trade-off" greenwashing: By doing something good for the environment, like buying a hybrid, people may be doing something bad at the same time. In this case, it's increasing the number of toxic batteries that are made.

Don't give up on hybrids just yet. While hybrids aren't perfect, the grass isn't greener on the other side of the fence. Read on to see why some hybrids aren't greenwashed.