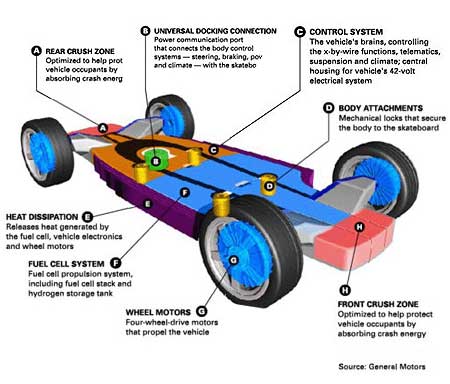 The Hy-wire's "brain" is a central computer housed in the middle of the chassis. It sends electronic signals to the motor control unit to vary the speed, the steering mechanism to maneuver the car, and the braking system to slow the car down.

At the chassis level, the computer controls all aspects of driving and power use. But it takes its orders from a higher power -- namely, the driver in the car body. The computer connects to the body's electronics through a single universal docking port. This central port works the same basic way as a USB port on a personal computer: It transmits a constant stream of electronic command signals from the car controller to the central computer, as well as feedback signals from the computer to the controller. Additionally, it provides the electric power needed to operate all of the body's onboard electronics. Ten physical linkages lock the body to the chassis structure.

The driver's control unit, dubbed the X-drive, is a lot closer to a video game controller than a conventional steering wheel and pedal arrangement. The controller has two ergonomic grips, positioned to the left and right of a small LCD monitor. To steer the car, you glide the grips up and down lightly -- you don't have to keep rotating a wheel to turn, you just have to hold the grip in the turning position. To accelerate, you turn either grip, in the same way you would turn the throttle on a motorcycle; and to brake, you squeeze either grip.

Electronic motion sensors, similar to the ones in high-end computer joysticks, translate this motion into a digital signal the central computer can recognize. Buttons on the controller let you switch easily from neutral to drive to reverse, and a starter button turns the car on. Since absolutely everything is hand-controlled, you can do whatever you want with your feet (imagine sticking them in a massager during the drive to and from work every day).

The 5.8-inch (14.7-cm) color monitor in the center of the controller displays all the stuff you'd normally find on the dashboard (speed, mileage, fuel level). It also gives you rear-view images from video cameras on the sides and back of the car, in place of conventional mirrors. A second monitor, on a console beside the driver, shows you stereo, climate control and navigation information.

Since it doesn't directly drive any part of the car, the X-drive could really go anywhere in the passenger compartment. In the current Hy-wire sedan model, the X-drive swings around to either of the front two seats, so you can switch drivers without even getting up. It's also easy to adjust the X-drive up or down to improve driver comfort, or to move it out of the way completely when you're not driving.

One of the coolest things about the drive-by-wire system is that you can fine-tune vehicle handling without changing anything in the car's mechanical components -- all it takes to adjust the steering, accelerator or brake sensitivity is some new computer software. In future drive-by-wire vehicles, you will most likely be able to configure the controls exactly to your liking by pressing a few buttons, just like you might adjust the seat position in a car today. It would also be possible in this sort of system to store distinct control preferences for each driver in the family.

The big concern with drive-by-wire vehicles is safety. Since there is no physical connection between the driver and the car's mechanical elements, an electrical failure would mean total loss of control. In order to make this sort of system viable in the real world, drive-by-wire cars will need back-up power supplies and redundant electronic linkages. With adequate safety measures like this, there's no reason why drive-by-wire cars would be any more dangerous than conventional cars. In fact, a lot of designers think they'll be much safer, because the central computer will be able to monitor driver input. Another problem is adding adequate crash protection to the car.

The other major hurdle for this type of car is figuring out energy-efficient methods for producing, transporting and storing hydrogen for the onboard fuel-cell stacks. With the current state of technology, actually producing the hydrogen fuel can generate about as much pollution as using gasoline engines, and storage and distribution systems still have a long way to go (see How the Hydrogen Economy Works for more information).

So will we ever get the chance to buy a Hy-wire? General Motors says it fully intends to release a production version of the car in 2010, assuming it can resolve the major fuel and safety issues. But even if the Hy-wire team doesn't meet this goal, GM and other automakers are definitely planning to move beyond the conventional car sometime soon, toward a computerized, environmentally friendly alternative. In all likelihood, life on the highway will see some major changes within the next few decades.

For more information about the Hy-wire and other emerging automotive technologies, check out the links below.