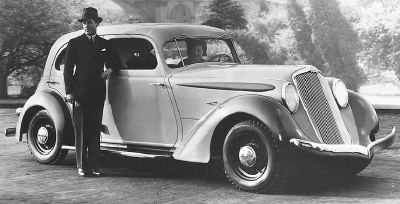 For 1934, Hupp hitched its falling star to the radical Loewy-designed J-421 Six and T-427 Eight. Advertised as the "Hupp Aerodynamic," these wore three-piece windshields with mild wraparound effect, headlights neatly faired-in between radiator and front fenders, and flush-mounted spare tire.

More-orthodox looks graced the W-417 Six, which had a good many body parts borrowed from Ford. Power came from a small 224-cid engine with just 80 bhp. J-models introduced a 245.3-cid engine with 93 bhp, while the T-Series offered 116 horses from an improved 303 eight.

But the big news about Hupp in this period concerned a fight for company control. Archie Andrews, promoter of the unsuccessful front-drive 1930 Ruxton, gained control of Hupp in late 1934. He was forced out a year later, but not before the firm was in ruins. Hupp was thus obliged to close its doors in early 1936, keeping them shut for over 18 months. Hupp returned for 1938 with 245 and 303 engines in conventionally styled E-822 Six and H-825 Eight models -- just in time for a brief but sharp national recession. As a result, total model-year production came to just 2001 units.

Meanwhile, Norman De Vaux had become Hupp general manager, and had just purchased the body tooling from the late front-drive Cord 810/812. Offering a rear-drive version in fair numbers would revive Hupp -- or so he thought. And indeed, De Vaux reportedly took 6000 advance orders for what was announced in 1939 as the "Junior Six," later renamed Skylark. But with funds critically low, Hupp wasn't able to move the project beyond 30 odd prototypes (or pilot models), all hand-built before year's end. Included in the run was one Skylark Corsair convertible.

Undaunted, De Vaux approached Graham-Paige president Joseph Graham, who agreed to produce Skylark bodies if G-P could sell its own version of the car. This deal gave Hupp a ready supplier and Graham a new model to supplement its languishing "sharknose" line. Hupp president J.W. Drake said it did "not mean a merger of the two corporations. The Hupp-Graham contract is a most favorable one for both of us, as careful checking of all production costs demonstrated that great savings could be made." In reality, this was a partnership born of desperation.

Like Graham's Hollywood, the Hupp Skylark was identical to the defunct Cord from the cowl back, but wheelbase was trimmed 10 inches, to 115, via a new front end designed by John Tjaarda. Both versions wore a double grille and "bullet" headlamps nestled inboard of the front fenders, but the upper grille was painted on Skylarks, chromed on Hollywoods.

Each firm naturally used its own engines. For Skylark this meant the 101-bhp, 245 six from 1935. Hollywoods carried a 217.8-cid Graham six with 120 bhp supercharged or 95 unsupercharged. The Skylark was thus a bit livelier than an unblown Hollywood, but slower than the blown model. It was also a bit cheaper: $1145 to the Graham's initial $1250.

This Hupp Skylark Custom is one of few: the model was plagued with manufacturing problems and ended up being produced more by Graham than Hupp.

But the Skylark/Hollywood was delayed by the same tooling problems and cost overruns that had plagued the Cord. Worse, a full nine months were lost in transferring Skylark tools to the Graham assembly line in Dearborn, which had to be reconfigured for the "new" models, so production didn't begin in earnest until May 1940 -- by which time most of the advance orders had been canceled. Graham, which grabbed the publicity spotlight with its blown engine, ended up building six times as many of these cars. Hupp gave up at the end of July 1940, just three weeks after the start of '41-model production. Only some 300 Skylarks were built in all.

Hupp recovered somewhat with military contracts during World War II, but elected not to return to the auto manufacturing business when peace returned. Eventually, Hupp began making accessories for other auto companies as well as kitchen and electronics equipment.