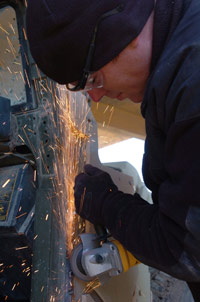 Images and video of Hummers appear nearly every day in reports on the United State's presence in foreign countries like Iraq and Afghanistan. Ever since Desert Storm, the Hummer has been a symbol of the U.S. military. In some cases, critics have pointed out perceived shortcomings in the Hummer's design, mainly focusing on its armor. AM General points out that the Army never demanded extensive armor for its Hummers. AM General does offer basic and supplemental armor for several Hummer models, though these packages only provided limited protection. A direct shot from a relatively powerful rifle could still pierce the armor.

Reports of the Hummer's armor limitations give rise to accusations that the equipment sent to our troops overseas isn't sufficient. Many military outfits up-armor their equipment, installing armor plating directly to the vehicle once they receive it. Adding armor to a Hummer increases its weight, which in turn can affect its performance. In some cases, a Hummer may be better armored but less maneuverable, making it a more likely target for enemy fire. Because of these limitations, critics say the Army should focus on other vehicle options like the Stryker vehicle.

On the civilian Hummer front, there are other issues. Drivers who enjoy challenging their skills and pushing a vehicle to its limits in off-road courses tend to love Hummer vehicles. A Hummer can scale hills that are insurmountable to most other cars. They can go up steep slopes, drive over objects that would obstruct other vehicles and even plow through up to 30 inches of water without a problem.

While Hummers might traverse a difficult obstacle course with relative ease, they face a much more daunting roadblock when it comes to environmentalists and other critics. The Hummers' infamous fuel efficiency -- or lack thereof -- is enough to turn a green-minded person bright red. In California, a state where environmental concerns are prominent in the minds of its citizens, Gov. Schwarzenegger faced criticism for his unabashed love of the vehicles. His involvement during the publicity tour of the H2H hybrid vehicle did little to calm his critics.

Others see the Hummer as a symbol of American excess and gluttony. A few go so far as to place the blame of the country's foreign policy on the owners of Hummers and other SUVs, claiming that we're involved in conflicts in the Middle East due to our enormous rate of oil consumption. Some people just feel the cars are large, ugly, unwieldy and scary to encounter on the road. A few people even take action: Hundreds of people protested at Hummer dealerships on November 15, 2003 -- a day activists called "National Protest Day Against Hummers" in a fit of creative genius [source: CommonDreams.org].

It seems that growing numbers of Americans are trying to be environmentally conscious. In that environment, the Hummer line of vehicles faces its toughest road yet -- there may come a day when Hummer owners face more than just the scorn of critics. It's ironic that the same vehicle that was a symbol of American heroism, determination and unity in purpose in 1991 has become a divisive symbol both at home and overseas today.

To learn more about Hummers and related topics, check out the links below.