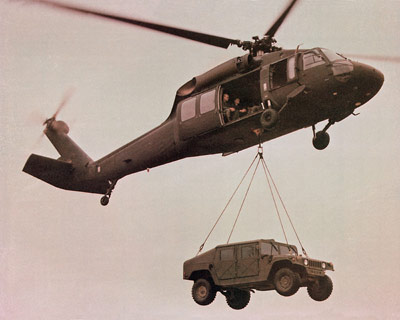 Helicopters can airlift Humvees and transport them into the field.
Photo courtesy AM General

The 15 variations on the basic Hummer model allow the Army to use the same vehicle as a troop or cargo transport, weapons carrier, shelter carrier (a vehicle designed to transport electronic equipment) or ambulance. Some variations look almost identical, while others seem to be completely unrelated. All use the same frame, drive train geometry, suspension and lower body.

The current 15 variations fall into two different broad categories -- the A2 model series and the Expanded Capacity Vehicle (ECV) models. Nine models are in the A2 series, including the M1097A2 Cargo/Troop Carrier, the M1097A2 Shelter Carrier, the M997A2 Maxi-Ambulance with Basic Armor and the M1045A2 Armament/TOW Missile Carrier with Supplemental Armor. The TOW missile is a tube-launched, optically tracked, wire-guided missile designed to neutralize enemy tanks and aircraft.

The Army has lots of options when it comes to arming A2 Hummers. Some of the weapons you might find on one include:

The Army also wanted some vehicles that could carry heavier payloads without a detrimental effect on the cars' mobility. AM General's response was the ECV series. The M1113 ECV is used in special operations missions and as a communications shelter carrier. The M1114 has upgraded ballistic protection and is used in military police and explosive disposal missions. The M1151 is an armament carrier and the M1152 can either be used as a troop carrier or shelter carrier. The M1165 is used as a command and control vehicle. The M1116 is the U.S. Air Force's variation on the Hummer, with a larger cargo area and turret gunner armor.

Just like a commercial vehicle, there's some optional equipment you can get on a military Hummer. The options available to both the Hummer and civilian vehicles are air conditioning, special paints, a hard top, central tire inflation system and a winch. Here are a few of the options the military can include that are definitely not available on your average set of wheels:

In the next section, we'll look at how the Hummer invaded the civilian automobile market.

He Ain't Heavy, He's My Hummer

You may recall from the previous section that the basic Hummer weighs a hefty 5,200 pounds (2,340 kilograms) -- that's almost 600 pounds more than a 2007 Ford F-150. Even so, it's a lightweight compared to the monster known as the M1151A1 with B1 armor, a Hummer designed as an armament carrier complete with armor designed to protect the vehicle from ballistic attacks and landmines. This little baby weighs in at a lean 10,300 pounds (4,635 kilograms), but when carrying its full payload, the GVW reaches an incredible 12,100 pounds (5,445 kilograms) -- more than 6 tons!