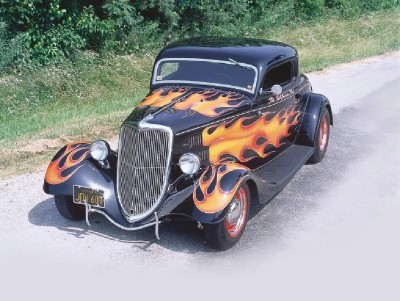 The California Kid, Pete Chapouris' chopped 1934 Ford coupe, was one of the most significant hot rods of the 1970s.

The 1970s could arguably be considered the most exciting decade in the history of hot rods, while the near-dormant custom car was showing signs of rebirth in its original '50s idiom.

There are many reasons for the hot rod revival, but they all lead back to a refocused Rod & Custom magazine. Most of the traditional magazines that featured hot rods and customs had moved away from that segment into drag racing coverage, muscle cars, more technical fare, and in the case of R&C in the '60s, everything from minibikes to plastic models to slot cars.

Now, through the staff's efforts, two developments organized the hot rod scene and ensured its numbers, then and well into the future.

In 1969, the R&C staff decided there should be a national event sponsored by the magazine to bring together as many hot rodders and their cars as possible. Besides the fun factor, it would give R&C an opportunity to acquire features on cars from other parts of the country, not just Southern California. Since they didn't have the budget to fly cross-country to photograph cars, they tried to meet car owners halfway.

A single, central event would also give the editors an opportunity to talk with their readers and to make contacts for potentially more features. They could take the pulse of what was happening elsewhere, and learn of new trends, shops, and personalities.

The editors decided to locate this event in the center of the country, and the town of choice was Peoria, Illinois. After contacting the city, locating a local club to help with logistics, and flying to Peoria to meet with the mayor, R&C proclaimed "All Roads Lead To Peoria" in the June 1970 issue.

Parallel to the event planning were ongoing discussions between the R&C staff and concerned rodders about a potential national organization. The goal was to form an organization to help fight pending state and national safety-equipment regulations, legislation related to the safety of homebuilt vehicles, and smog-control devices for hot rods, or "street rods" as they were now called.

Also, many rod owners were finding it difficult to get insurance. An organized group, it was surmised, would attract a national company to insure street rods.

It became apparent that the best place to attempt to start an organization would be at the upcoming event, now dubbed the Street Rod Nationals. So, the National Street Rod Association, or NSRA, was conceived on the eve of the Nationals, just in time to sign up members from all over the country.

More than 600 pre-1948 rods came out for the first Street Rod Nationals on August 14-16, 1970. They showed off their cars and took part in games, but mostly came to party and celebrate the largest gathering of hot rods yet assembled.

"Street Is Neat" was the slogan conceived by R&C's Tom Medley, and with a successful event and the beginnings of a national organization, the street rod scene was looking neat indeed. Attendance at the second Nationals doubled, and in recent years, the event has grown to attract more than 14,000 cars. The NSRA has more than 50,000 members today.

The Nationals became a springboard for several milestones that would make street rodding what it is today. A number of publications dedicated to street rods emerged. Street Rod magazine first appeared in late 1971, followed by Street Rodder and Ray Brock's Rod Action in '72. These publications would help spread the word and spotlight new companies and their products.

What about custom cars? Well, 1971 would mark the end of the continuous string of custom cars to be featured in magazines since 1948. Milo Broz's sectioned '50 Ford coupe was the last custom to be featured. It appeared in Rod & Custom, which was the last magazine giving customs any recognition.

For the most part, the few custom cars that did exist were from the 1960s. And the few being built were either '50s or '60s relics late in their completion, or they were the work of enthusiasts who didn't much care about the current trends.

A couple custom car trends did linger, though. Corvettes were somewhat popular with customizers because their fiberglass bodies easily took to modifications. And pickups were being lowered with an occasional rolled pan. But the traditional custom car was dormant.

If there was a significant customizing activity in the early 1970s, it had to be the predominately Hispanic lowriders. They could be found on the streets of East Los Angeles, the San Fernando or San Gabriel Valleys of suburban L.A., parts of Arizona, and in Albuquerque, New Mexico.

They tended to be late-model Chevrolets, Pontiacs, or the occasional Oldsmobile or Cadillac. Lowered with dressed-up engines, aftermarket wheels, and wild custom paint jobs, they exhibited excellent craftsmanship -- like 1950s customs.

Generally, lowriders had velvet or velour interiors with features like swivel seats, cocktail bars, TVs, and/or elaborate stereos. About all they lacked compared to traditional customs were body modifications, though some had them. They also differed stylistically. Many wore original badges and trim, and they were frequently festooned with such accessories as sun visors, fender skirts, bumper guards, fog lamps, and headlight visors.

To avoid problems caused by the lingering Southern California ride height laws from the 1950s and '60s, most also used hydraulic suspensions that could lift or lower the whole car in a matter of seconds. The hydraulics utilized lift gate rams from large trucks attached to the suspension components, and they were powered by an army of batteries in the trunk.

But within the next few years, interest in custom cars would be ignited by a popular movie. Continue to the next section to learn more about the custom car's newfound popularity.