The Decline of the Custom Car 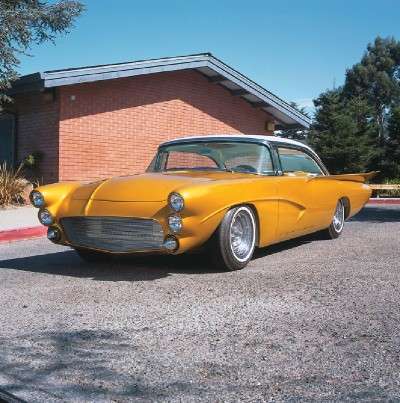 This radical 1962 custom car by Bill Cushenberry, dubbed the Marquis, had a drastically modified front end.

By the late 1950s, car shows had become popular with custom car owners, and their interest spawned the show car circuit of the '60s. But even in the '50s, a car wasn't eligible to compete a second year unless it had new modifications that distinguished it from its previous iteration.

As a result, many of the wonderful customs of the '50s were slowly degraded from a styling standpoint with unnecessary changes in the name of competition. Canted headlights and more baroque styling features were turning the once beautiful cars into overdone statements that should have been left alone. This, too, began a general decline of the custom car genre.

But it didn't stop there. As the decade progressed, wacky show rods proliferated the show car scene. Ed "Big Daddy" Roth was one proponent of the genre with his wild fiberglass creations. As Ed tried to outdo himself each show season, his custom show rods went farther over the top, though they usually held some charm.

Other rod builders got into the act, too, which led to ever-stranger creations. By the 1970s, this would manifest itself in such odd concepts as motorized toilets, Coke machines, and pool tables.

Another factor in the decline of custom cars in the 1960s was Hollywood. Some of the famed customizers of the '50s moved slowly away from building custom cars for individual customers to the more lucrative television and movie work.

George Barris was the most notable of these, but Dean Jeffries also did customizing and stunt work for Hollywood, especially after moving his shop next to the Hollywood freeway adjacent to Universal Studios. Larry Watson actually became an actor, appearing in more than 150 television shows from the 1960s through the '80s. Even Von Dutch got into the movie scene, doing two cars for the Steve McQueen movie The Reivers and setting up timed explosives for numerous movies. These were four of the key figures from the 1950s custom car era.

Not everyone had abandoned the traditional custom car. In the Midwest, Darryl Starbird and the Titus brothers (Jerry and Elden) produced custom cars based on both newer and older cars throughout the 1960s. In Northern California, Art Himsl and Rod Powell customized cars and did elaborate custom paintwork, carrying on the traditions of two other Northern California customizers from the 1950s: Joe Bailon and Joe Wilhelm. But the custom car was slowly evaporating from the car scene.

The enthusiast magazines provided perhaps the greatest evidence of the custom cars's decline. By the late 1960s, only Rod & Custom magazine was featuring any sort of custom car, and the majority of these tended to be modified Corvettes with flared fenders, extended duck tails, and bubble hoods.

Some of the last custom cars featured were based on later Rivieras and Chevrolet Impalas, but it was questionable whether they actually improved upon the stock designs. It seemed as if the end of the custom car was near.

Meanwhile, the hot rod world was changing with the times even though its numbers were dwindling. The overhead-valve engine, headed by the small-block Chevy V-8 that had made its debut in 1955, had pretty much eliminated the Ford flathead and even some of the earlier overhead-valve engines. Automatic transmissions were getting lighter and more efficient, and were finding their way into more hot rods. As the trends changed to thinner white sidewall tires, hot rodders followed as well.

As the decade progressed, stylistic changes in drag racing, like the use of magnesium wheels and raised front ends for weight transfer, appeared on street roadsters and coupes. A similar phenomenon had happened in the 1950s when Indy roadster characteristics such as hairpin radius rods and larger meter tires in back and smaller in front were adopted by hot rodders.

On the club scene, groups like the L.A. Roadsters, Bay Area Roadsters, and Early Times found their way into Hot Rod, Popular Hot Rodding, and especially Rod & Custom magazines with their high-quality cars and club gatherings, now called rod runs. Some of these club runs were combined to produce larger gatherings like the Roadster Roundup, which still continues today.

Over the years, members of each of these clubs worked at numerous West Coast hot rod publications. This helped keep the hot rod fires fanned even as actual participation in rodding waned.

As the decade drew to a close and drag racing became more of a professional endeavor, engine and chassis builders and component manufacturers started businesses to cater to the latest speed equipment and service needs.

Others offering T-bucket kits were Ted Brown, Bird Engineering, and Total Performance in Connecticut. Some of these enterprises would lead off the second coming of the hot rod in 1970.

Though the 1960s ended on a down note, some new and exciting developments were in the works for the hot rods of the '70s, while the custom car would slowly begin to make a comeback as its old self.

A new era and a new generation of enthusiasts were about to burst onto the scene to remember and preserve the old and bring on the new. In the next section, get detailed information on the hot rod's rebirth in the 1970s.