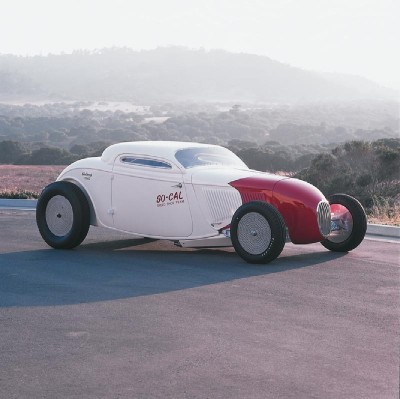 On the hot rod and custom car competition side, salt flats and lakes racing were finding limited participation due to their need for flat, barren landscapes. With the topography being unique to only a few areas, there was no possibility for expansion. Thus, this type of racing maintained its tradition of amateur participation, and does so even to this day.

With the National Hot Rod Association's (NHRA) help, however, drag racing took off. Expanded classes, evolving safety procedures and equipment, and new tracks helped it grow, but even more important was the professional presentation.

New, high-compression overhead-valve engines were introduced in Cadillacs and Oldsmobiles in 1949, and this engine design became available in most cars from the Big Three by '55. These faster, more reliable powerplants found favor with hot rodders, especially those who drag raced, and led to the development of new speed equipment and more speed shops to sell it.

Typical early drag racing speeds hovered around 100 mph at the dawn of the dragstrip in the early 1950s, but by the end of the decade speeds were exceeding 180 mph. Events were literally moving quite rapidly in drag racing's development, and not just on the West Coast.

Dragstrips were opening in both the East and Midwest too, helped along by the NHRA's Safety Safari -- a group of men paid to organize dragstrips under NHRA sanction. By 1955, the first NHRA "Nationals" was held in Great Bend, Kansas, with drag racers across the country participating.

As the decade progressed, an unspoken, accepted look developed for hot rods and custom cars, and that look was slightly different for the East and West Coasts. East Coast custom cars tended to sit higher than their West Coast counterparts due to the bad roads and harsh winters Easterners faced. East Coast cars also tended to be less radically modified, but they took on more baroque styling themes when they were heavily customized.

Channeled hot rods found greater favor in the East as owners strived for more sports carlike proportions. Closed coupes and sedans were also built in greater abundance in the East, again because of the more severe weather.

Highboy roadsters and coupes that adopted the look of the prewar lakes racers were more prevalent on the West Coast, as were more radical custom cars inspired by greater competition at car shows. The West drove the trends for hot rods and custom cars due mainly to the location of the magazines that catered to these cars, but also due to the abundance of craftsmen located in California.

Later in the decade, a number of East Coast magazine titles emerged to better cover the local scene, and this only helped spread the popularity of hot rods and customs nationwide.

With a burgeoning national scene, the car show phenomenon also spread across the country. Hollywood, California-based Rod & Custom magazine acknowledged this fact as early as 1953 by featuring an article on a prominent West Coast custom car -- the Hirohata Mercury -- driving cross-country for the annual Indianapolis Custom Show held in conjunction with the Indy 500.

During the winter months, these indoor rod and custom car shows intensified interest while racing and cruising all but disappeared due to the weather. They also helped spotlight regional speed shops, mechanics, and body shops that catered to the hot rodder or custom car owner.

As the decade drew to a close, custom cars transitioned away from 1940s and early '50s coupes and sedans with moderate-to-radical body modifications. The new look, featured on late '50s finned hardtops and convertibles, utilized paint techniques and relatively little custom bodywork. Customizing was now in a paint gun.

Detroit was designing beyond the need to customize, but teenagers and custom car enthusiasts still needed to stand apart from their parents and peers.

Hot rods were ending the decade on a high note, too, but they would face a number of challenges over the next few years as America entered the dawn of the factory "muscle car" era.

Hot rods and custom cars seemingly came out of nowhere at the beginning of the decade to become a cultural phenomenon that encompassed the whole United States. Hot rods and custom cars appeared in movies, advertising, and television shows. They affected laws and city policies. Their influence reflected the changing importance that the teenage culture would take on as the decades progressed.

The car scene didn't just grow in the 1950s. It became a subculture with its own clothes, language, businesses, magazines, events, shows, competitions, and more. It was the golden age of the hot rod and custom car.

Detroit's muscle cars had a direct effect on the hot rod's popularity in the 1960s. We'll discuss this chapter in hot rod history in the next section.