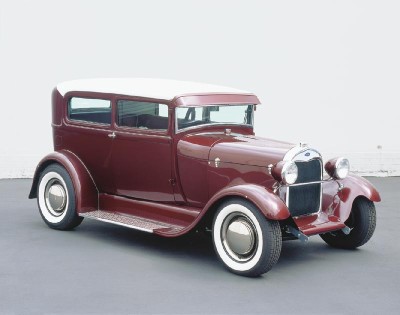 Jack Chrisman's Model A Sedan, with its Chrysler 354-cid Hemi engine, was a formidable force in early drag racing.

In the 1950s, the formation of hot rod organizations like the National Hot Rod Association (NHRA) was an important step toward respectability, but much work needed to be done. When night fell and cruisers gathered at the drive-ins, the scene often became loud and rowdy, and sometimes got out of control.

This caused concern for city fathers, police, and neighboring residents. Street racing was a frequent occurrence, and so were accidents. It was illegal, dangerous, exciting, and fun -- a sure cocktail for disaster. But this wasn't the only thing drawing the ire of parents and the constabulary.

Some hot rodders and custom car owners adopted a look, brought back with them from the war. They wore leather jackets, blue jeans, and T-shirts with cigarette packs rolled into sleeves. It has become a cliché, but at the time it was meant to convey an antisocial, edgy distinction from what was acceptable. The look was part of the point of the whole hot rod and custom car phenomenon: To create a different lifestyle for adolescents from that of their parents. It was teenage rebellion. It was the beginning of the youth culture.

Though similar in appearance and ideology, there were differences between hot rodders and custom car owners. Hot rodders bought their parts from speed shops and performed most of the work on their cars themselves. The custom car crowd sought out the expertise of shops that performed mild-to-wild body alterations. And therein lies the difference and the rub.

Some rodders felt disdain for custom cars because they were "low and slow" and most of the work was performed by outside shops, not the owners themselves. They derided custom cars as "lead barges" or "lead sleds" due to their sometimes abundant use of lead as a body filler.

Custom car owners shot back at hot rodders with names like "shot rods" and "Ricky racers." Rodders tended to be "gearheads" that weren't as interested in the aesthetics of their cars as custom car fans. Custom guys concentrated on looks and cared little for performance. These two groups are intertwined in our modern view of their activities, but they were actually quite different and could be antagonistic toward each other.

Some feel that the custom car was a direct offshoot of the hot rod. That view doesn't jibe with the vastly different approaches the two factions had toward their cars. Yes, some rodders drove custom cars and vice versa, but it wasn't the norm. Owning two cars was beyond the reach of most hard-working young men. And the abilities required to master engine and chassis modifications, as well as body customizing and fabrication, were rarely found in a single person, or even among a whole peer group.

That's where the custom car shops came in. Barris Kustoms was the best known of the early custom shops. Located in Lynwood, California, the shop was in what some call "the nest" for its concentration of custom-related enterprises. Gaylord's Custom Upholstery, which specialized in Carson-type tops, was just around the corner from Barris Kustoms, and Larry Watson, Ed Schelhaas, and Dean Jeffries were also located within the nest.

Also in the L.A.-area were Link Paola, Jimmy Summers, the Carson Top Shop, Gil and Al Ayala, and Valley Custom. Northern California had its players, too. Gene Winfield operated out of Modesto, and Joe Bailon and Joe Wilhelm worked in the Bay Area.

By the mid 1950s, Dean Jeffries, Von Dutch, Ed "Big Daddy" Roth, Junior Conway, Dick Jackson, and Larry Watson were all plying their custom painting and/or pinstriping talents either at Barris' or within the nest. Some, like Von Dutch, were already established names, and the rest would become famous in the custom car world as the '50s progressed.

For the hot rodder or drag racer who wanted performance beyond the means of a shade-tree mechanic, some of the shops in the nest also catered to hot rodders and drag racers. The Chrisman clan, which included brothers Art and Lloyd and uncle Jack, started their engine building and racing careers in Lynwood, as did Keith Black, who pioneered the development of the Chrysler Hemi engine in drag racing's early days.

Back on the streets, car clubs formed all over the L.A. basin with names like Renegades, Road Runners, and Night Riders. They were fraternities of like-minded rodders or custom car owners.

Toward the end of the decade, a distinction even developed among dry-lakes racers, drag racers, and the "street" hot rodders who were organizing clubs like the Pasadena Roadster Club and L.A. Roadster Club. Some members of the street roadster clubs raced, but the main point was to bring together owners with similar tastes and to change the public's perception of them as riotous renegades unable to stay within the bounds of the law and accepted behavior.

The clubs also organized social events for their members and hosted car shows that allowed members to showcase their cars to the general public.

With car club-peer recognition, car-show competition, and magazine coverage rewarding the best cars, the level of craftsmanship ramped up greatly. For the most part, hot rods and especially custom cars were well-built, attractive cars that met or exceeded anything coming out of Detroit.

Competitive drag racing would soon take off -- on both coasts -- with the help of the NHRA. Go to the next section for more details on the national racing scene.