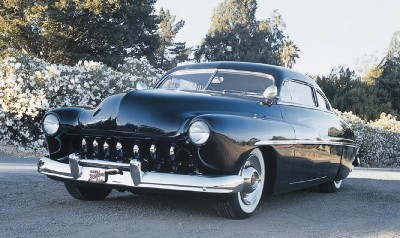 Why the hot rod and custom car craze came about had much to do with what was happening on this side of the Atlantic and Pacific oceans, but also a lot to do with what lay beyond them. World War II changed the world and laid the foundation for the American car-crazy phenomenon that exploded in the 1950s.

Once the hostilities in Europe and Asia had ceased, those lucky enough to make it back wanted to enjoy living the way they couldn't while serving Uncle Sam. Finally home, ex-GIs couldn't get enough of cool cars, all-American burgers and fries, and the girl next door who had grown up since they left. Building a hot rod or custom car was a method of self-expression, and for many, the cars provided the means for the social life they desired.

Many GIs also found it hard to let go of the adrenaline rush of enemy action. Something inside them yearned for a little bit of that thrill, but without the potential wartime consequences. Getting behind the wheel of a cool hot rod or custom car fulfilled those conscious and unconscious desires. And with many coming back from the war with some money saved and a job waiting, they had the means to acquire what they wanted.

Also consider that young car enthusiasts were presented with a broadening array of speed and customizing equipment, new-car offerings, and magazines that hadn't been available before the war. Hot Rod magazine had been around since 1948, but Motor Trend, Car Craft, Hop Up, and Rod & Custom also sprang up in the early '50s, spreading the word about new products and the cars people were modifying.

The venerable flathead V-8, the engine of choice for hot rodders, was still around, but it had evolved and found its way under the hood of what many consider to be the quintessential custom car: the 1949-51 Mercury.

These Mercurys were the final evolution of the low fender, high beltline school of design. The new 1947 Studebakers, '48 Oldsmobiles and Cadillacs, and '49 Fords and Chevys all raised their fenders in line with their beltlines, forever changing automobile design. These cars laid the groundwork for the radical Chrysler, GM, and Ford products of 1955 that would incorporate an uninterrupted body without fender, hood, or trunk definition.

The 1949-51 Mercurys at least partially held on to the earlier body design language, making them familiar to customizers, and therefore popular as modern versions of the old school of design. This resulted in some of the most memorable custom cars of all time.

Many of the famous Mercs were created, or at least updated, at the Barris brothers' shop in the early to mid 1950s. They included the '49 coupes of Sam Barris, Louis Bettancourt, and Jerry Quesnel; the '50 coupes owned by Buddy Alcorn and Wally Welch; Ralph Testa's '50 convertible; the '51 coupes of Dave Bugarin, Bob Hirohata, and Frank Sonzogni; and Freddy Rowe's '51 convertible.

It is a short list to be sure, especially when you consider that this small group of Mercury custom cars influenced such a large contingent of custom car aficionados that have loved these cars ever since. Imagine the impact they must have had when they were first introduced to the world in the early 1950s.

Meanwhile, for hot rodders, the Russetta Timing Association, established in 1948, and the Southern California Timing Association, which had formed in '37, were still holding speed events at the SoCal dry lakes. Classes were established based on characteristics such as a car's weight, body style, aerodynamics, engine displacement, and number of cylinders.

For those who wanted to go even faster, racing on the vast salt flats at Bonneville in Southern Utah was catching on. The first National Speed Trials for hot rodders was held there in '49, and participants liked the longer runs and faster times.

While Russetta and the SCTA had given structure to the dry lakes, it was becoming apparent that a body was needed to organize, monitor, and sanction the heads-up racing called "drag racing." Hot Rod magazine and its editor Wally Parks, under the auspices of the National Hot Rod Association (NHRA), stepped up to fill the void. Wally founded and became the first president of the NHRA in 1951, all the while handling his editorial chores at Hot Rod.

The NHRA's mantra was to get it off the streets and race safely at an organized dragstrip. Wally eventually left Petersen Publishing Company (Hot Rod's publisher) in 1963 due to the increasing demand for his time at the NHRA.

The NHRA brought respectability to a sport that some viewed as dangerous and even rebellious. In the next section, learn more about hot rod "attitude" and custom car clubs.