The 1950s: The Golden Age of the Hot Rod and Custom Car 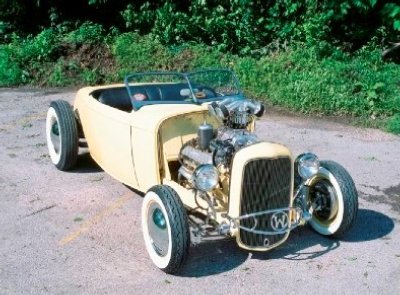 In 1952, Dr. Leland Wetzel had this '32 Ford roadster equipped with a Ford flathead V-8 engine.

It's a summertime Saturday night in the 1950s, and the Southern California suburbs are hopping with hot rods. In the San Fernando Valley just north of L.A., ex-GIs are bent over their crude roadsters doing last-minute checks before heading out at midnight to one of the dry lake beds east of Los Angeles.

Their goal is to be first in line for the heads-up racing that starts at dawn. Soon they'll aim their headlights for the excitement of speed and the camaraderie that goes with running the straight, dusty courses. But first, a few of them conduct impromptu light-to-light races down San Fernando Road to check out the clutch and size up the competition.

Over in the bedroom communities of Lakewood, Lynwood, and Compton a few miles west of L.A., cruisers in their late teens and early 20s are "drive-in hopping." It's a ritual that takes off from The Clock drive-in in Bellflower, then heads down Pacific Coast Highway to The Clock on Sepulveda in Culver City, over to Tiny Naylor's in Hollywood, onto the freeway to Toluca Lake and Bob's Big Boy, over to Bob's in Pasadena, a straight shot west to Nixon's on Whittier Boulevard, and finally back to The Clock in Bellflower.

For those low on gas money, there's always cruising the boulevard. Chopped 1949 ­Mercs dressed in either in dark, organic colors or multihued primer, roadsters and coupes with hopped-up flatheads, and groups of buddies in dad's four-door sedan drive up and down Bellflower and Whittier boulevards slowing for girls, friends, and maybe even a short stoplight race. It's all in the name of blowing off steam.

The drive-ins play host to a traveling circus of "show boats" flaunting their polished custom cars. These hangouts are perfect for setting up some side-by-side racing along Sepulveda Boulevard or over by the oil derricks outside Whittier in Santa Fe Springs. Drive-ins all over Southern California are the social-activity "command centers" for the hot rod and custom car culture.

Occasionally, street racing accidents end up on the front page of the Orange County Register in grisly detail. There is safer, organized racing in Orange County, too. It's the abandoned airstrip, which is considered the first organized drag racing venue in the country -- Santa Ana Dragstrip.

It's the golden age of the hot rod and custom car, and Southern California is the place to be. Decades from now, these scenes will be relived and recreated thousands of times. Hot rods and customs from this period will be revered, copied, and restored to preserve for all time this magical era in automotive history.

It could only happen now, under these circumstances, only in this place, only for a while. It is the convergence of many factors, tangible and intangible.

How had World War II contributed to this phenomenon? Continue to the next page to find out.