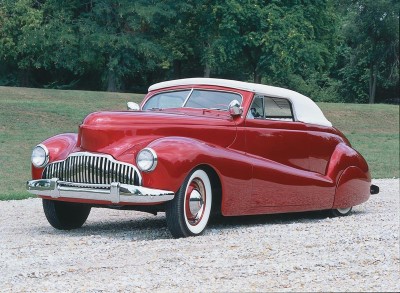 As the 1940s began, the hot rod and custom car fad continued to trickle down to car enthusiasts throughout the Los Angeles area. Now it involved older used cars that were transformed into "mystery cars" through sometimes minor, sometimes major body modifications. But it remained a relatively small and localized fad before many of the participants in this trend were called into service in WWII.

Southern California wasn't the only place you could get custom car work done. As early as the late 1930s, Harry Westergard was customizing '36 Ford cabriolets and coupes out of his home garage in the Northern California city of Sacramento. Westergard chopped tops, incorporated grilles from more expensive cars like Packards and LaSalles, formed custom hoods, and lowered suspensions. He also shaved door handles, then added Buick solenoids to open the doors.

Westergard would forever perpetuate the art of customizing through his influence on locals Dick Bertolucci and especially George and Sam Barris -- all of whom started performing custom bodywork in the 1940s. George Barris worked for Westergard for a while, but then moved to SoCal and opened his own shop in '44. Sam Barris joined his brother in '46, and together they built what would become the most famous custom shop of all time. Meanwhile, Bertolucci started out of his father's garage in '48.

While the Barris brothers had both NorCal and SoCal ties, Los Angeles had other customizers of its own. Jimmy Summers had been doing pioneering custom car work on more pedestrian production cars out of his Melrose Avenue shop since the 1930s, as had Roy Hagy from his Hagy's Streamline Shop on Vermont.

Also on Vermont was none other than the Carson Top Shop, which created the iconic padded Carson top in 1935. Link Paola was doing typical custom car work just east of Los Angeles in the Montrose/Glendale area, as were the Bistagne Brothers.

By the end of the decade, Gil and Al Ayala were doing custom body work and paint from their East Los Angeles shop on Olympic Boulevard, and Bill Gaylord was customizing bodies and upholstery from his Lynwood shop. Even racing legend Frank Kurtis did custom work in L.A. between his racing activities.

Though any car was fodder for the customizer's torch, the popular choices were Fords and Mercurys from 1935 through the current models. Typical modifications involved trim removal; lowering the body by cutting or heating the springs; adding glass-pack mufflers to get that "burble" sound; frenching headlights; rounding the corners of the doors, hood, and trunk; chopping the top; and sectioning the body.

Custom cars from this era, ranging to about 1955, are considered to be the really classic examples of the genre. As customizing grew in popularity in the mid '50s, the cars started to receive baroque modifications with the introduction of dual and/or canted headlights, complicated trim, and scoops and vents anywhere from the quarter panels to the hood.

Customizing of the late 1940s and early '50s was about integrating the separate fenders and tops into the body, eliminating the little trim pieces like badges and head- and taillight surrounds, and giving a car a simple, singular look as opposed to the stock appearance that could look like a bunch of different components bolted together.

Two things happened to spread the gospel of hot rods and custom cars during World War II. First, many servicemen were filtered through California on their journey to the Pacific. There, they witnessed firsthand America's car-culture capital, with its unique customs and stripped down hot rods ripping through the streets. It must have left quite an impression on many.

Second, many GIs from Southern California spread information and pictures of hot cars to any soldier with time to spare. The racing and cruising activities must have seemed cool and exciting to any young soldier. Simple exposure must have been enough to spark the interest of young soldiers.

So once the seed was planted, it had to be nurtured, and for that we can thank Robert "Pete" Petersen and Hot Rod magazine, which came on to the scene in 1948.

After the war, the economy boomed. Young veterans had a bulletproof attitude after facing the horrors of combat, and they now found themselves with excesses of time and money, along with mechanical skills learned in the service. The postwar energy helped hot rodding and customizing grow more than it ever had in Southern California, and Hot Rod spread the word nationwide.

Hot Rod picked up where Throttle left off, the latter never returning after its one-year run in 1941. The fledgling magazine touched on all aspects of the car-enthusiast arena, covering hot rods, custom cars, drag racing, and even circle-track racing.

Hot Rod also informed readers about the latest speed equipment, and taught them how to perform engine and body modifications. Hot Rod was in a good position to promote safety, and to help organize early drag racing and car shows, all of which helped promote and organize hot rodding itself. Speed-parts manufacturers and custom and performance shops had a place to advertise. It was a win-win situation for all involved.

As the end of the 1940s approached, hot rods and custom cars were poised to become not just a trend but a lifestyle. Postwar adolescents were discovering the freedom and social significance of driving a unique automobile on the streets of Downtown, USA.

As we will see in the next section, many of the styles and innovations born in the '40s and refined in the '50s would forever change the way automotive enthusiasts spend their free time and present themselves to the outside world.