The Future of Hot Rods and Custom Cars 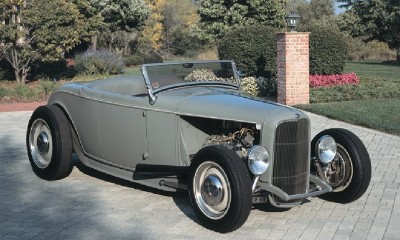 The Ritzow Deuce, Goodguys' 2004 Street Rod of the Year, has a look rooted in the '40s coupled with­ state-of-the-art technology.

As we dig back into the past for hot rod inspiration, many are finding that their past may not be the same as their friends' or contemporaries'. The older fellows might like '40s and '50s styles, while younger guys might relate better to the '60s. As a result, we are now seeing interest in the '60s styles -- things such as bubbletops and exotic fiberglass rods like those from Ed "Big Daddy" Roth.

These types of cars appear from time to time at car shows and rod runs. There may only be a handful due to the expertise required to make a body from scratch, but their inclusion points to styles from the past coming back, seemingly in chronological order.

Along these same chronological lines is the new interest in the Gasser look. Gassers were the stock-bodied hot rods of drag racing's golden days of the mid-1960s. To aid weight transfer, they were jacked up in front with big slicks in back. The Gasser look is finding its way back into hot rodding in increasing numbers. It had to happen: As cars got lower, there would inevitably be an opposing trend.

So we see that styles from the 1940s, '50s, and '60s have returned. It hasn't happened yet, but we may soon see a groundswell of interest in resto rods of the '70s, and then who knows, maybe even the smoothie style of the '80s. You may not want to think about saving that hard-edged billet mirror for the nostalgic smoothie rod you might be building in 2020, but things could be heading that way.

With the number of magazines and events that existed in the '80s, a lot of youth were exposed to rods and custom cars at the time. In the future, adults who remember those cool billet windshield wipers or independent front suspensions may strive to create something similar for themselves.

Most of these trends affect hot rods more than customs. While the custom car will certainly never go away, it may become a shadow in the midst of hot rods, as well as other enthusiast subjects such as muscle cars, Volkswagens, tuner cars, pickups, you name it.

As stock automobiles from the 1940s and '50s become increasingly rare and more expensive, it becomes a little harder to take a torch to one. And for those who do, there is no turning back. It's best to be versed in the intricacies of custom metal fabrication or face the task of saving it if that chopped top goes awry.

In recent years, many good-looking newly built custom car have appeared at events throughout the country. That's a good sign, but their numbers are only a fraction of the hot rods touching asphalt for the first time. Currently, brand-new Model A roadster, 1932 Ford roadster, and three-window coupe bodies are produced in metal -- and just about any body style and year of Ford is available in fiberglass.

There are also reproduction metal 1969 Chevrolet Camaro and 1947-54 Chevy pickup bodies, with '67-68 Ford Mustangs not far behind. No shoebox Ford or 1949-51 Mercury body has been produced in metal, though, which speaks to their demand. Though fiberglass Mercury bodies are available from longtime customizer Gene Winfield, they don't seem to be making it onto the street.

As hot rodders and custom car enthusiasts act and react to current and past trends in building styles and components, one thing is for sure: Hot rods and customs are an American phenomenon -- one that participants are proud to carry on. The cars are creative, interesting, and just plain cool.

They are a celebration of the last 75 or so years of innovative backyard efforts, some of which have turned into multimillion-dollar industries. Many rodders and customizers have become heroes or icons to other enthusiasts. In all cases, the cars have thrilled owners and onlookers.

It takes vision, determination, and the skill of a metal virtuoso to take on the challenge of making an old car handle, run, ride, and look better. These qualities seem to be innate in many American men and women, and they have been for years.

Though its roots were with the postwar youth, those original participants are aging to the extent that one might expect the whole phenomenon to fade with their memories.

But the state of the hot rod and custom car hobby is as strong and vibrant as it has ever been. It appears that this marvel of American ingenuity and imagination will remain for future generations to prize and admire -- possibly forever.