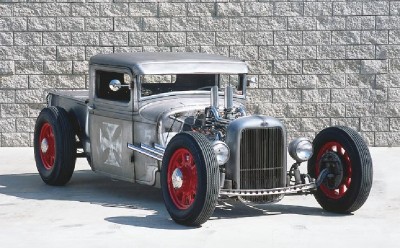 So far, we've discussed the evolution of the hot rod and custom car over the last 75 or so years. Besides the physical evolution, you've read about its growth and steady increase in popularity. So, by the start of the new millennium you might imagine that its image was set in the hearts and minds of America and that exposure was at its peak.

The documentary spiked ratings, and a second documentary on Jesse and his shop followed. That program saw excellent ratings as well, and the success begat Monster Garage in 2002.

Monster Garage was conceived as a weekly program about building a crazy car or truck in five days. Several automotive personalities have been guests on the show, including myself. Concurrent to Monster Garage, American Chopper, a show about a dysfunctional family building choppers in New York, also garnered excellent ratings for the Discovery Channel.

Following the success of these shows, Discovery looked for the next big thing, and that honor fell to the hot rod and custom car. In 2004, Discovery launched American Hot Rod, a show that follows the workings of Boyd Coddington's shop.

Also in 2004, The Learning Channel (TLC), a sister to Discovery, introduced Overhaulin'. Starring hot rod and custom designer/fabricator (and another former Coddington employee) Chip Foose, the show follows the building process at Chip's shop as he turns guests' project cars into modern rods and custom cars.

As for those trends, building styles continue to evolve. Today, anything can be seen at a rod run or custom car show. Many of the more-contemporary components and equipment developed since the mid '70s -- by companies such as Pete & Jake's, Super Bell, TCI, and the Deuce Factory, and later Magnum Axle, Chassis Engineering, and the So-Cal Speed Shop -- can be seen on hot rods and custom cars today.

Some of those parts have fallen out of favor, though, as a few of the styling trends of the 1970s, '80s, and even '90s have been abandoned for a more traditional look. Many of today's hot rods are highly detailed and look like they may have come from any era.

The difference between the rods and custom cars of the past and those that emulate them today is detail. From fabrication to execution, these new nostalgic cars are rolling art. Today's builders have taken the construction of hot rods and custom cars to heights that the builders of the 1950s couldn't have fathomed. Heck, they've taken them to heights that builders of the '80s couldn't have imagined!

The flathead Ford engine has experienced a resurgence in popularity, but the cars they end up in today are usually more detailed and better built than those of the past.

Some of this interest in vintage styling has come from rat rods, but it also came about as a backlash against the ever more computer-controlled engines and drivelines in today's new cars.

The use of modern drivetrains in hot rods and custom cars complicates construction and maintenance. As a result, a lot of builders are going back to simpler ways to build cars to keep the fun factor in their projects. If a project requires an engineer to package the engine, transmission, computers, and electronics, and another one to keep it all running, the fun's gone.

The rat rod genre continues to add more recruits. These cars often incorporate more-radical customizing and hot rodding elements. Severely chopped tops, drastically channeled bodies, and radically equipped vintage engines all provide striking looks. And there is no segregation of the rods and custom cars -- if it's cool and primered, it's welcome.

From the looks of things, the participants seem to be having fun, which is what it is all about. Rat rods are often stripped down without a lot of detailing and finish, making them quick to build and worry-free. In some ways, owners of highly detailed rods and custom cars must be envious.

I doubt that many high-tech hot rod owners can park their cars and walk away without worrying about what may befall their cars in parking lots or on city streets. Rat rodders don't have that problem.

What does the future hold for hot rods and custom cars? Find out in the next section.