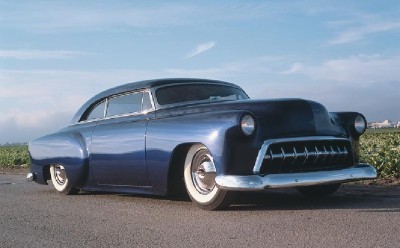 The Cole Foster '54 is a chopped 1954 Chevy hardtop whose traditional styling pays homage to custom cars of the 1950s.

Feeling that they had explored the fringes of modernizing hot rods with the smoothies of the 1980s, many rodders built rods in the '90s that looked and sounded like rods from the past. Flathead engines started showing up more often in newly built roadsters. As a result, speed equipment that hadn't been produced in decades returned to parts catalogs.

Then, a breakthrough product appeared, and it made quite a splash. Brookville Roadsters in Brookville, Ohio, came out with an exact reproduction 1932 Ford roadster body in 1997. While '32 Ford bodies had been available for decades in fiberglass, this body was significant because it was made out of steel, just like the originals.

Apparently, a lot of people had been waiting to find a reasonably priced steel body because hundreds laid out the cash for a Brookville body and made plans to build a '32 roadster.

In addition to the bodies, tires that hadn't been manufactured in decades were now available from specialty tire suppliers like Coker. Combining the best of the old and the new, Coker offered radial tires with wide white sidewalls. What seemed unimaginable only a few years earlier was now possible. A hot rodder could buy a new version of almost any old speed part.

As more enthusiasts were initiated into the fold in the 1990s, they in turn exposed others to the hobby, and thus even more joined the bandwagon. The Street Rod Nationals grew to 14,000 pre-1949 hot rods, making it one of the largest car shows in the world.

To see just how mainstream the hot rod had become, look no further than Detroit. After Mitsubishi supplied the driveline for Boyd Coddington's Aluma Coupe in 1991, Chrysler quietly developed a hot rod-style show car, the Plymouth Prowler, for the '93 auto-show season. The Prowler received a positive response, and Chrysler introduced a production version for the '97 model year. Annual production continued until 2002 at about 3500 units each year.

Traditional hot rodders complained that the V-6 wasn't true to the hot rod spirit. Still, the Prowler served as a symbol of how far the hot rod had come in 50 or so years -- from stripped down Detroit castoff to limited-production "halo" vehicle.

High-end hot rods caught the interest of Japanese automakers, too. In 1994, the Q29 Infiniti Flyer became the first Oakland Roadster Show America's Most Beautiful Roadster winner with a Japanese engine. Based on a '29 Ford, the car was built by Art and Mike Chrisman for Joe MacPherson.

Infiniti didn't pay for the project, but Nissan's luxury division did supply many parts and much technical support. The yellow roadster utilized the engine and transmission, as well as other components, from an Infiniti Q45. It was quite an engineering feat.

A couple of years later, Toyota's luxury arm, Lexus, ventured into the hot rod arena with a one-off highboy roadster show car based on the venerable 1932 Ford. The car incorporated the drivetrain and some suspension components from a Lexus GS400. The marriage of the old and new looked natural.

Hot rods and custom cars had traditionally been preoccupations for young men, but in the 1990s it became obvious that the age of the participants was increasing. Actually, the hot rod and custom car fans of the '90s were many of the same participants from the hobbies' earlier incarnations in the '50s and '60s.

By now, their children had left the nest, they had ascended to higher income tax brackets, and they had more spare time. They were looking for a hobby that also had a social aspect, and a return to the hot rods and custom cars of their youth fit the bill.

The hot rod and custom car hobby was going strong at the end of the millennium, but it had yet to hit full stride. While the rat rod scene had begun to attract a new, younger crowd, another development would soon introduce hot rods and customs to an even wider audience. We'll let you in on that development in the next section.