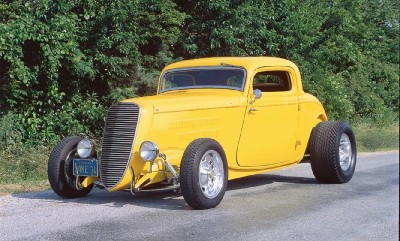 Just as the custom car seemed to fade completely, developments took place in 1973 and '74 that would help rekindle an interest in '50s custom cars.

George Lucas' movie American Graffiti was released in 1973 to an enthusiastic audience that connected with the film's nostalgic depiction of teenage activities in the summer of '62. Central to the story were cruising customs and hot rods. For car enthusiasts, what could have been more perfect than the Deuce coupe, chopped Merc, and '58 Impala that were central to the story? American Graffiti got people's attention, but there was more to come.

Once again, the magazines played a part. In 1973, Hot Rod, not known for featuring custom cars, ran an article that espoused 1950s customizing as an art form. Examples were included along with a pullout poster by artist Robert Williams. Titled "A Devil With a Hammer and Hell With a Torch," the poster celebrated the accomplishments of George Barris and Ed "Big Daddy" Roth and showed real and imagined '50s- and '60s-style custom cars.

Then, Street Rodder devoted its November 1974 issue to chopped Mercs. Bang! The magazine devoted almost entirely to street rods was featuring a custom Merc on its cover. It was all coincidental, but the 1950s style custom car was being celebrated in different media. Slowly, '50s style customs were coming back.

Back on the street rod scene, numerous fledgling companies were manufacturing components exclusively for hot rods by the mid 1970s. Included among them were Pete and Jake's Hot Rod Parts, The Deuce Factory, TCI, Total Performance, and Super Bell Axle Company. They made kits for engine and transmission installations, suspensions, and disc brakes. The Deuce Factory even had a completely new, stamped 1932 Ford frame.

These products made constructing a street rod a lot easier and safer. The components were well-made and engineered, and the new rodding magazines, as well as the Street Rod Nationals, provided the means for effective marketing.

From these companies emerged another hot rod milestone. Shops began specializing in constructing hot rods. Customers could buy any service from chassis fabrication to upholstery to wiring, or opt for a complete "turnkey" rod. Dan Woods' Contemporary Carriage Works, J&J Chassis, Andy Brizio, and Pete and Jake's Hot Rod Repair all were doing hot rod construction and fabrication by the mid '70s.

These were the beginnings of the huge street rod aftermarket industry. It was a slow and steady progression, and an obvious outgrowth of the Street Rod Nationals and the NSRA.

Custom cars were slow to this party, and when they finally arrived, it was in a different way than hot rods. The custom car movement had grown from its rebirth in this decade, but the ideas applied to the custom car hadn't changed significantly from the 1950s.

The same cars were being customized, the shoebox Fords and 1949-51 Mercs for example, and these cars had more complicated bodies and components than hot rods, making aftermarket bodies and parts less feasible to produce. Aftermarket bodies for typical '50s custom subjects weren't needed anyway because these cars were still readily available and relatively affordable.

Also, most custom car modifications have always been unique and labor intensive for each car. Whereas almost every hot rod needed suspension components, making them lucrative to manufacture, custom cars couldn't benefit from as many aftermarket components because it was too difficult at the time to manufacture custom bodies and the market for such products was much smaller.

It also made little sense to make a chopped top for a Mercury or a hood with rounded corners, for instance, because each custom car is a personalized statement, often with different treatments for the various custom modifications.

In the mid to late 1970s, early custom car pioneers, like Gene Winfield and Joe Bailon, noticed an increased demand for their '50s-style customizing services -- things they hadn't done in maybe 10 or 15 years. Dick Dean, who had been doing customizing work since the '50s, started specializing in chopping the tops of anything, like new pickups, and late-model cars, as well as traditional custom car subjects. He advertised in the magazines and became known as the "Top Chop King."

Back in the hot rod world, a new look had taken hold, that of the "resto rod," so-called for its use of original components such as lantern-style cowl lights and accessory trunk racks.

This gave restorers two reasons to dislike hot rodders. First, rodders were "ruining" original cars by cutting up the frames and bodies and installing late-model engines, air conditioning, and the like. Second, the resto rodders were robbing restorers of their prized original components like headlights, accessory clock mirrors, and greyhound hood ornaments.

Original-type mohair upholstery and even stock two-tone paint jobs were showing up with regularity at rod runs and in the magazines.

By the end of the decade, the typical hot rod was a clean, simple traditional or resto rod with modern advances like independent suspensions, disc brakes, rack-and-pinion steering, power windows, power brakes, and tilt steering columns. Like they often had in the past, junkyards provided the components that builder incorporated into their hot rods, only now some different parts were chosen.

The quality of street rods was on the rise, and so were participation and the street rod industry as a whole. But a styling shift was on the horizon. The look had its roots in the 1970s, but it wouldn't manifest itself until the '80s.

And while the custom car had begun to return to its 1950s roots in the '70s, it was still loosely organized with very few shows to galvanize its following.

The '80s would change that, as several events and organizations would emerge to give custom fans a place to congregate and celebrate. We'll cover these in the next section.