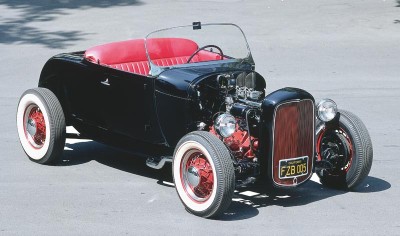 This hot rod, called the Elvis Car because it was The King's ride in the 1957 movie Loving You, started out as a Model A Ford. See more pictures of hot rods.

The timeline for hot rods and custom cars starts before World War II. Teens itching to tinker with cars and go fast were racing cheap Ford Model Ts on Southern California's dry lakes and street racing in Los Angeles even in the 1920s. The Harper, Muroc, and El Mirage dry lakes -- all 50 or so miles north of Los Angeles -- saw racing activity from the '20s up to World War II. Racing at El Mirage continues today.

Speed junkies could jump in their hopped-up, chopped-down Model Ts and be at one of the dry lakes in less than three hours. Or, if the need was urgent, they could find a deserted back road or open field. At the lakes, the cars were timed with handheld stopwatches and placed in a class determined by the resultant time.

The vast majority of the cars being run were four-cylinder Ford Model Ts or their successor, the four-cylinder Model A. The cars were cheap, plentiful, lightweight, and easy to work on. They responded to simple "hop ups" like higher compression, ignition and timing adjustments, additional carburetors, and more radical cam grinds.

The drill was fairly simple: Buy the nicest roadster you could find (because roadsters were the lightest); strip off everything not needed to go fast, like the fenders, headlights, hood, and top; find some cheap used tires to replace your bald ones or to mount over your existing tires for a little extra tread; and go racing.

On the next page, learn more about the first speed shops!