Browse the article How Horsepower Works 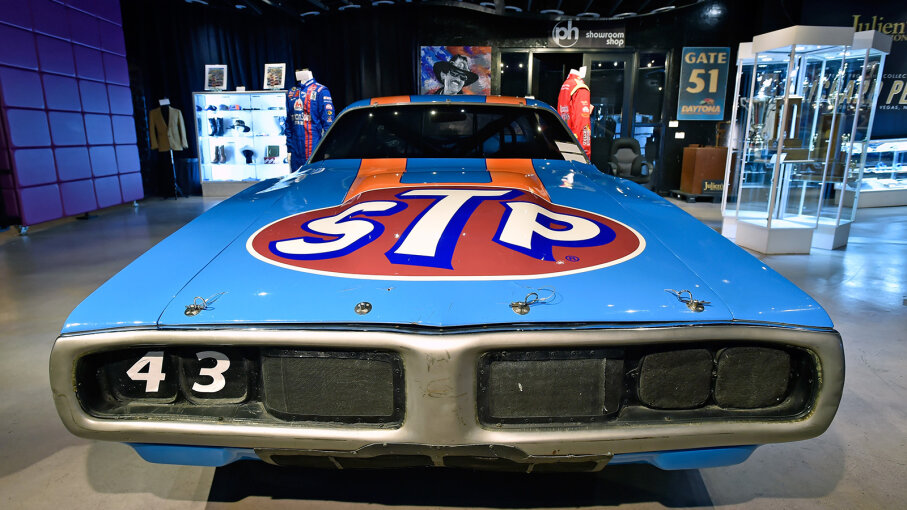 The 1974 Dodge Charger that Richard Petty drove to his fifth and sixth Grand National/Winston Cup Series Championship in 1974 and 1975 and was used for his victory at the 1974 Daytona 500. The 2018 Dodge Charger SRT 392 cranks out 485 horsepower and 475 pound-feet of torque, says the automaker. David J. Becker/Getty Images

Chances are you've heard about horsepower. Just about every car ad on TV mentions it, people talking about their cars bandy the word about and even most lawn mowers have a big sticker on them to tell you the horsepower rating.

But what is horsepower, and what does the horsepower rating mean in terms of performance? In this article, you'll learn exactly what horsepower is and how you can apply it to your everyday life.

The term horsepower was invented by the engineer James Watt. Watt lived from 1736 to 1819 and is most famous for his work on improving the performance of steam engines. We are also reminded of him every day when we talk about 60-watt light bulbs.

The story goes that Watt was working with ponies lifting coal at a coal mine, and he wanted a way to talk about the power available from one of these animals. He found that, on average, a mine pony could do 22,000 foot-pounds of work in a minute. He then increased that number by 50 percent and pegged the measurement of horsepower at 33,000 foot-pounds of work in one minute. It is that arbitrary unit of measure that has made its way down through the centuries and now appears on your car, your lawn mower, your chain saw and even in some cases your vacuum cleaner.

Horsepower rates the engine performance of cars and even lawn mowers. Learn what horsepower means, how it is measured and how it works in high-performance cars.
© 2018 HowStuffWorks

What horsepower means is this: In Watt's judgement, one horse can do 33,000 foot-pounds of work every minute. So, imagine a horse raising coal out of a coal mine as shown above. A horse exerting 1 horsepower can raise 330 pounds of coal 100 feet in a minute, or 33 pounds of coal 1,000 feet in one minute, or 1,000 pounds 33 feet in one minute. You can make up whatever combination of feet and pounds you like. As long as the product is 33,000 foot-pounds in one minute, you have a horsepower.

Horsepower can be converted into other units as well. For example:

In this article, you'll learn all about horsepower and what it means in reference to machines.

If you want to know the horsepower of an engine, you hook the engine up to a dynamometer. A dynamometer places a load on the engine and measures the amount of power that the engine can produce against the load.

Similarly, if you attach a shaft to an engine, the engine can apply torque to the shaft. A dynamometer measures this torque. You can easily convert torque to horsepower by multiplying torque by rpm/5,252.

You can get an idea of how a dynamometer works in the following way: Imagine that you turn on a car engine, put it in neutral and floor it. The engine would run so fast it would explode. That's no good, so on a dynamometer you apply a load to the floored engine and measure the load the engine can handle at different engine speeds. You might hook an engine to a dynamometer, floor it and use the dynamometer to apply enough of a load to the engine to keep it at, say, 7,000 rpm. You record how much load the engine can handle. Then you apply additional load to knock the engine speed down to 6,500 rpm and record the load there. Then you apply additional load to get it down to 6,000 rpm, and so on. You can do the same thing starting down at 500 or 1,000 rpm and working your way up. What dynamometers actually measure is torque (in pound-feet), and to convert torque to horsepower you simply multiply torque by rpm/5,252.

What a graph like this points out is that any engine has a peak horsepower -- an rpm value at which the power available from the engine is at its maximum. An engine also has a peak torque at a specific rpm. You will often see this expressed in a brochure or a review in a magazine as "320 HP @ 6500 rpm, 290 lb-ft torque @ 5000 rpm" (the figures for the 1999 Shelby Series 1). When people say an engine has "lots of low-end torque," what they mean is that the peak torque occurs at a fairly low rpm value, like 2,000 or 3,000 rpm.

Another thing you can see from a car's horsepower curve is the place where the engine has maximum power. When you are trying to accelerate quickly, you want to try to keep the engine close to its maximum horsepower point on the curve. That is why you often downshift to accelerate -- by downshifting, you increase engine rpm, which typically moves you closer to the peak horsepower point on the curve. If you want to "launch" your car from a traffic light, you would typically rev the engine to get the engine right at its peak horsepower rpm and then release the clutch to dump maximum power to the tires.

One of the areas where people talk most about horsepower is in the area of high-performance cars. In the next section, we'll talk about the connection there.

A car is considered to be "high performance" if it has a lot of power relative to the weight of the car. This makes sense -- the more weight you have, the more power it takes to accelerate it. For a given amount of power you want to minimize the weight in order to maximize the acceleration.

The following table shows you the horsepower and weight for several high-performance cars (and one low-performance car for comparison). In the chart you can see the peak horsepower, the weight of the car, the power-to-weight ratio (horsepower divided by the weight), the number of seconds the car takes to accelerate from zero to 60 mph, and the price.

You can see a very definite correlation between the power-to-weight ratio and the 0-to-60 time -- in most cases, a higher ratio indicates a quicker car. Interestingly, there is less of a correlation between speed and price. The Viper actually looks like a pretty good value on this particular table!

If you want a fast car, you want a good power-to-weight ratio. You want lots of power and minimal weight. So the first place to start is by cleaning out your trunk.

For more information on horsepower and related topics, check out the links that follow.