How the Honda EV-STER Works 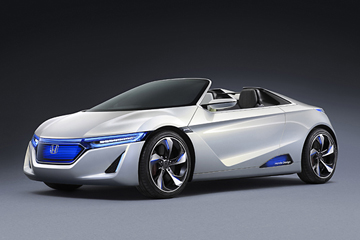 In the automotive world, Honda has a great reputation for reliable, well-built machines. Unfortunately for Honda, reliable doesn't translate into sexy in any language and even Honda has admitted that their cars have been a bit boring lately [source: Drive]. But at the 2011 Tokyo Motor Show Honda introduced the EV-STER, a concept electric sports car that has more in common with Tesla's Roadster than it does with any of Honda's models.

Honda wants to position itself as a fun and exciting car company by filling the sports car hole that was left when the S2000 was discontinued in 2009. Their creative director of styling design and development division, Yoshinori Asahi, said that although Honda's cars had been boring in the past, they were looking ahead and were going to design exciting cars that match the company's personality [source:Drive]. There's no better way to show Honda's fun side than when you see the Honda EV-STER for the first time.

The two-seater, rear-wheel drive convertible concept was originally dreamed up as an all-electric vehicle, but Honda is actually planning on building the EV-STER with a gasoline engine mounted behind the seats [source: Siu]. Yes, you read that right; Honda is actually planning on bringing this concept to fruition. The EV-STER will be built and sold -- although where it will be sold is still unknown.

Putting the engine right behind the seats will produce a balanced weight distribution and keep those rear wheels in check when the light turns green. An electric version is likely to follow, which is a little ironic since the concept name clearly identifies the car as an electric vehicle (hence the EV in the name). It's not known if Honda will change the name to clear up the confusion.

Go on to the next page to see what's so stunning about the EV-STER. 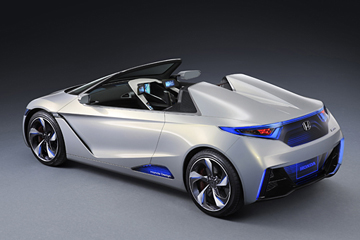 A typical conversation between a new Honda owner and a friend may go something like this:

Now, there's nothing wrong with a car that has impeccable reliability. Who wants to break down on the side of the road?! But what's missing from the previous conversation is any hint about the car being fun to drive or stylish. Honda is privy to this, and with the EV-STER they're planning on doing something about it.

Honda's lead designer said that his goal for the EV-STER was to create a car that "surprises people with just how cool it is" [source: Honda]. They've accomplished that task by focusing on the styling of their new concept and creating one fluid design inside and out.

Most cars are designed with one person designing the outside while another does the same for the inside. But with the EV-STER Honda used the same designer both inside and out. The result is a convertible sports car that continues the same dramatic feeling even after you've opened the door.

The inside of the EV-STER is made to feel like a Honda sport bike. The driver's side dashboard has two electronic displays on each side of the instrument panel, which makes them look like the side-view mirrors of motorcycle. The passenger seat blends in with the rest of the car's dark black interior while the driver's seat emerges from the rest of the interior with its light green and flat grey ensemble.

The front of the EV-STER boasts a sporty grill mixed with aggressive headlights and the hard lines on the wheel and door panels lead your eye to the back of the car. Honda added a significant amount of blue lighting on the outside of the vehicle, which may be more for the concept unveiling than we'll see in production version. The carbon-fiber body makes the EV-STER an especially light vehicle, which may be a necessity if the all-electric version doesn't have enough power.

Many concept vehicles achieve the futuristic detail that sets them apart from production vehicles, but the Honda EV-STER's design is the perfect balance of future and immediacy.

If you think the EV-STER is all beauty and no brains, think again. Go on the next page to find out about all the technology in the EV-STER. 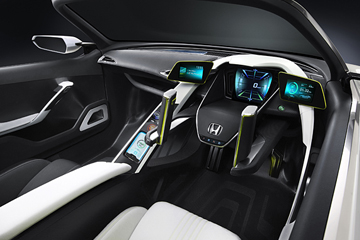 Designers of concept cars love to incorporate new technologies into their design and even add a few technology features that might not technically exist yet. Not everything will make it into the production model, but the idea behind it is to infuse new ideas into car creation that will expand all of our expectations. The EV-STER is no different.

Let's start with the steering controls. Instead of a traditional steering wheel, the EV-STER is driven using two joysticks that pivot from front to back. Honda calls the system twin-lever steering and it's designed to keep the driver from fighting the g-force while turning the car.

When you make a turn in your car, you twist the steering wheel in the direction you want to go, but as you make the turn, inertia causes force against you and the car as you turn the wheel, making it harder to turn the wheel. The twin lever steering system eliminates this by cutting out the steering wheel's resistance and using two joysticks that can either be pushed or pulled.

When making a left-hand turn you push the right joystick and pull the left one towards you. To make a right-hand turn you would do the opposite. It's not likely that this system will make it into the production version, but it's a good example of Honda's commitment to innovation.

Honda did add some tech ideas to the EV-STER that are already on the market today, like electronic adjustment of the suspension and the engine's performance. The driver can choose a more sporty or comfortable suspension and also adjust how the engine performs. A digital display shows the car's electric charge range, time until empty and other accessory information.

The accessories and the climate control system in the EV-STER are powered by small solar panels on the dashboard. And just in case you need to take a little break from driving this high-tech sports car, the EV-STER comes equipped with Internet access as well.

All this technology is great, but how does it move? Let's go on to the next page to learn about the EV-STER engine. 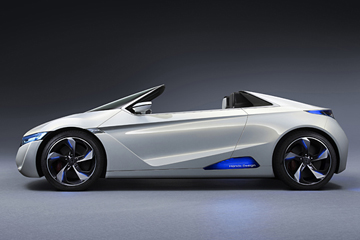 At the EV-STER's 2011 debut in Tokyo, the car was introduced as an electric vehicle, or EV. Honda is using lithium-ion batteries to power the 78-horsepower electric motor [source: Udy]. It's not an impressive amount of horsepower, especially for an electric sports car, considering that the all-electric Tesla Roadster has 288-horsepower [source: Tesla].

The battery range is expected to be 100 miles (160.9 kilometers), the same as Nissan's all-electric Leaf [source: Nissan]. The EV-STER's batteries can be recharged from a standard electric outlet in six hours or in just three hours using Honda's quick-charge system [source: Honda].

Although the EV-STER was introduced an electric car, and gets its name from it, Honda is going to release the first production version of the car with a gasoline engine. The specifications for the gasoline engine haven't been released, but it's very likely that the engine will be much more powerful than the electric motor and have much faster track times.

The closest predecessor of the EV-STER was Honda's S2000, which boasted 237-horsepower. If Honda brings something close to this in the production version of the EV-STER, then car enthusiasts will have something to cheer about indeed. But even if the EV-STER stays exactly the same way it is on the concept showroom floor, there will still be plenty to appreciate from Honda's new direction.

Go on to the next page to find out lots more information about the Honda EV-STER.

Ridiculous History: Ford GT40 Was Created Out of Spite to Beat Ferrari
Was the Ford Edsel really that much of a failure?
How the New Knight Rider Car Works